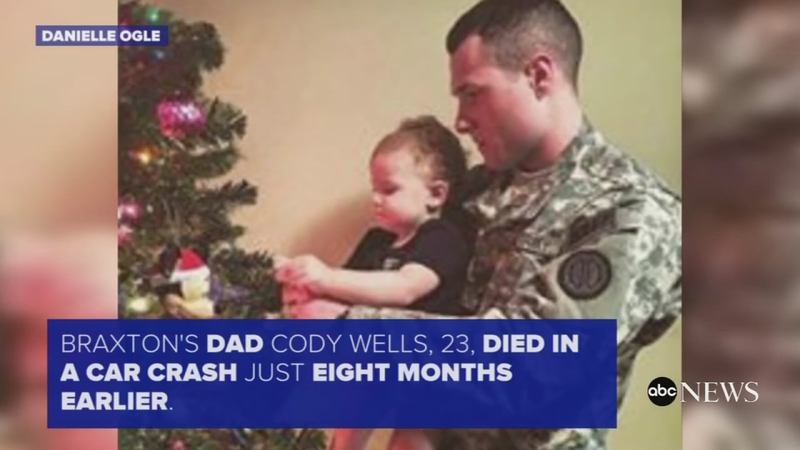 FORT PAYNE, Ala. -- One toddler received a special gift this Christmas that was left at his father's grave by a man the tyke had never met.

"It was wonderful because my son, he's been a very unhappy little boy for a long time and when he saw that present, he was ecstatic, smiling from ear to ear," Braxton's mom, Danielle Ogle of Fort Payne, Alabama, told ABC News. "His entire day changed."

Ogle, 24, said her fiancé, a corrections officer with the Fort Payne Police Department, died off-duty on April 3 after his vehicle hit a tree.

Since that day, she and Braxton visit Wells' gravesite daily at lunchtime. Ogle leaves toy cars behind at Wells' headstone so Braxton can play with them and be reminded of his dad, she said.

"Cody had the biggest heart," Ogle said. "He would go out of his way for anybody and wouldn't want anything in return. The bond between him and Braxton was unbelievable. The way he loved Braxton was just not something you see every day."

That day, Blake met Ogle and Braxton and later reached out to Ogle through a mutual friend, asking to leave a surprise Christmas gift for the boy.

"When we pulled up to the graveyard, he immediately saw the present and took off running," Ogle said. "The first words he said were, 'Mommy, I can't wait to see what my daddy has left me.' He told me that he thought his daddy flew down from heaven and left him a present."

Blake said he left Braxton Hot Wheels after noticing the ones at the grave had been broken up by a mower, he told ABC News.

Blake said seeing the two at the cemetery struck a chord.