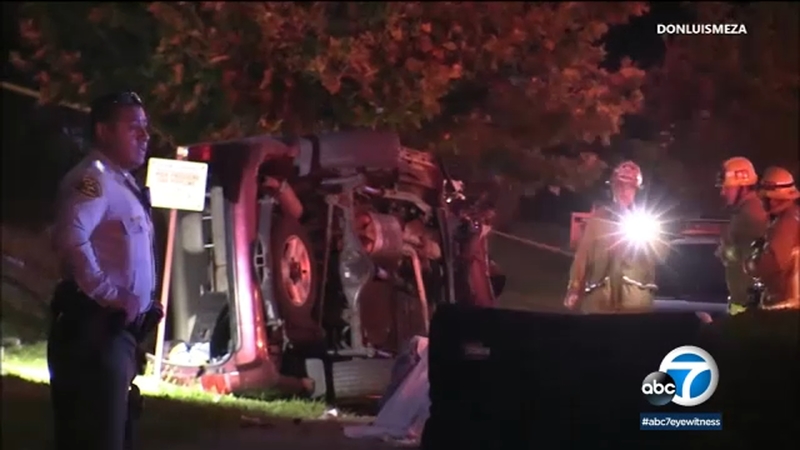 PALMDALE, Calif. (KABC) -- A resident of the mobile home park where a fatal crash occurred Wednesday night says she heard the horrific collision just before 8 p.m. and ran over to see what happened.

"I heard an impact, brakes, and then I heard a giant impact."

The woman didn't want us to use her name or show her face.

"I ran over there and saw a black SUV flipped to its side. The police were already there yanking the people out of the vehicle. And I saw a horrific..."

She was too upset to describe seeing her neighbor's body on the ground.

On Thursday, the skid marks that lead to a cinder block wall gives us an idea of just how powerful the impact was.

According to the Los Angeles County Sheriff's Department, deputies were in pursuit of an SUV with six people inside, most of them, juveniles. Deputies say when they backed off, the SUV went out of control on the 1200 block of Avenue S, struck a woman and crashed into the cinder block wall.

"It sounded like a legit sonic boom," Jenny Miguel said.

Jenny tells ABC7 she was in bed just before 8 p.m. when she heard the crash happen near her home.

"At first I saw smoke and cops running and grabbing a guy screaming, saying 'no, no, no' and then I hear him saying 'oh I think she's gone, I think she's gone' and I'm confused and I see something on the ground and sadly it was the remains."

Investigators say the driver of the SUV, a juvenile, was arrested. The others were detained. Along with the investigation into the fatal crash, detectives are also looking into whether the group in the SUV was involved in criminal activity before deputies gave chase.

A pedestrian was killed after being struck by a vehicle that was fleeing deputies in Palmdale Wednesday evening, authorities said.