VIDEO: Father risks his life to save daughter, pushing her away from speeding car in Glassell Park 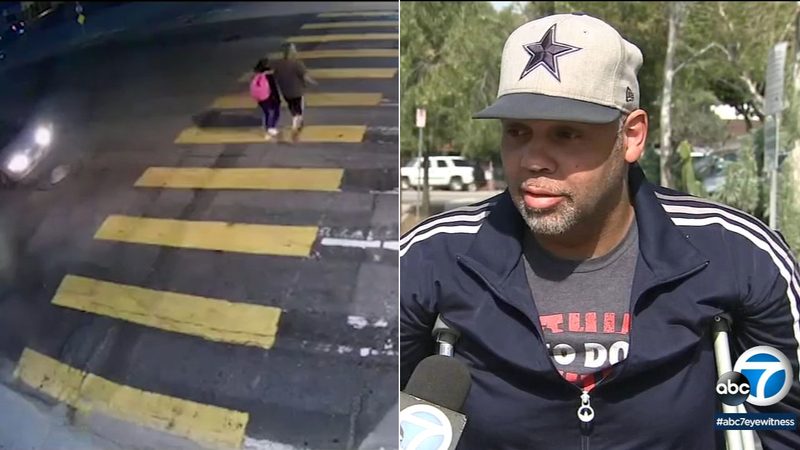 GLASSELL PARK, LOS ANGELES (KABC) -- Dramatic video from Glassell Park shows a father risking his life by pushing his daughter out of the way of a speeding car, which ends up striking him instead.

The incident happened near San Fernando Road and Hallett Avenue Nov. 16, 2018 around 5:15 p.m. when the father was picking his child up from school.

The shocking video, which was captured by a surveillance camera from an adjacent building, shows a red sedan speeding toward the two as they walked through a marked crosswalk.

The father, Michael DeVore, pushes his 11-year-old daughter Rien out of the way -- mere seconds before impact.

"I saw a car coming at a high rate of speed, and I realized within that instant there was no time to think of a plan of action," DeVore said. "It was react now or it's going to happen."

The car ended up striking the father, who was launched onto the sidewalk.

"I kind of hoped I would get cleared, too, but I didn't," DeVore said. "I was propelled in the air, kind of like spun like a helicopter blade, maybe like a full turn or 3/4 turn."

"I was angry," DeVore said. "I tried to get up with a broken femur, and it was broke in multiple places."

Police are hoping someone will recognize that red four-door vehicle, which may have been a red Toyota Camry, and give investigators a call.

DeVore said the driver was between 65 to 75 years old with gray hair.

"She was very small, her head barely reached above the dash, and honestly, I don't even think she saw me," DeVore said. "If family members know something happened, just come out. It's the right thing to do."

DeVore said he's gone through all his savings and has been unable to return to work because of his injuries. He is still healing.