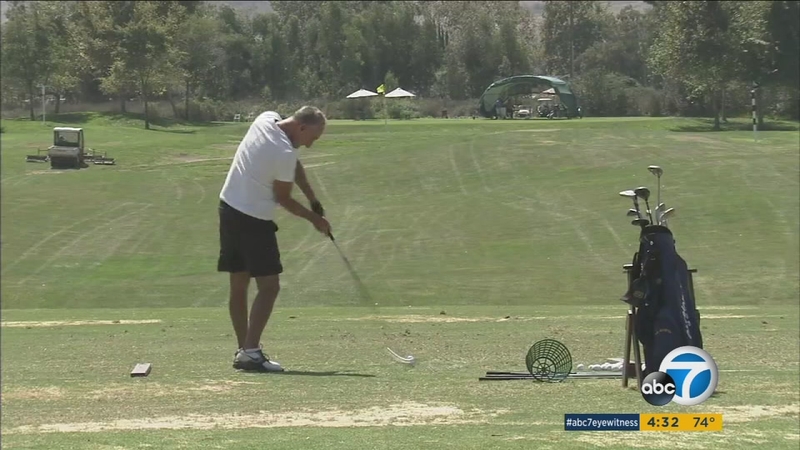 MISSION VIEJO, Calif. (KABC) -- When you head out on the golf course you may worry about your grip or even your form - but starting a fire?

"He was very surprised about it," said Orange County Fire Authority Capt. Larry Kurtz, as he talked about a golfer who unintentionally started a 98-acre brush fire at the Arroyo Trabuco Golf Course in Mission Viejo this week.

Kurtz says the golfer tried to hit his ball out of the rough when he hit a rock with his titanium-alloy golf club.

"It can create a spark of almost 3,000 degrees Fahrenheit, which is more than enough to start a brush fire," Kurtz said.

That isn't a surprise to James Earthman, a UC Irvine chemical engineering and materials science professor who did a study in 2014.

He tested six golf clubs - three with titanium alloy heads and three with stainless-steel surfaces. He used a variety of rocks, including some taken from the Arroyo Trabuco Golf Course, and on every swing that hit a rock he reached the same findings.

"With stainless steel we never saw any sparks," Earthman said. "When we tested a titanium club, every time we hit a rock with a titanium there were a lot of sparks."

Such fires are not uncommon. Authorities say in 2011 it happened at the same golf course in the same area as the most recent fire, and in 2014 at Irvine's Shady Canyon Golf Course.

It makes some golfers think twice when they hit their ball out of bounds.

"It probably would actually make you think, especially with a day like today when it's breezy and it tends to be breezy in Southern California," said Paul Hudrick of Laguna Niguel as he headed to the driving range at the Arroyo Trabuco Golf Course.

As for titanium drivers, Earthman says they're not as much of a concern because they're usually used on a tee box, where it's green and irrigated and there's no dry vegetation that could be ignited.

While Earthman says most golf clubs today have heads made entirely of stainless steel, he would like to see all titanium clubs taken out of circulation.