The suspect is believed to be a firefighter who had a dispute with a coworker.
KABC
By Veronica Miracle and ABC7.com staff 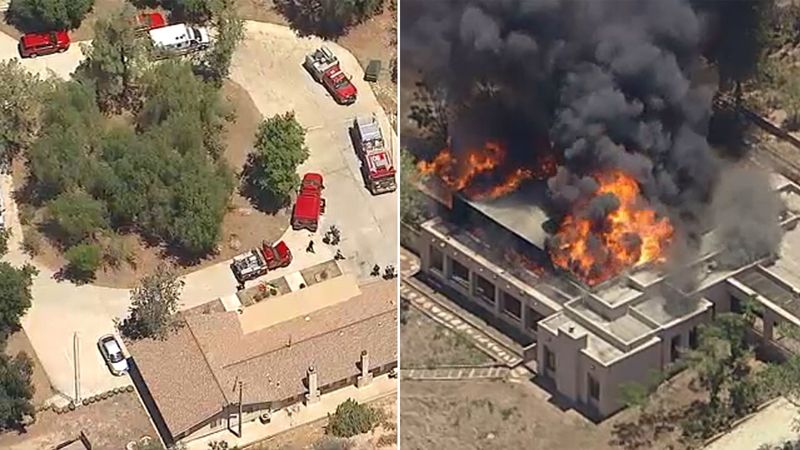 AGUA DULCE, Calif. (KABC) -- A Los Angeles County firefighter apparently killed a fellow firefighter, wounded another and then set his house on fire and ended his own life, officials say.

The firefighter was apparently involved in an ongoing dispute with a coworker at Fire Station 81 in Agua Dulce, sources tell Eyewitness News.

The suspect, who was off-duty at the time, shot that fellow firefighter at the station just before 11 a.m., and wounded a fire captain who was not believed to be intentionally targeted in the shooting.

The suspect then apparently drove to his own home in Acton, set it on fire and killed himself, sources say. His body was found in a pool outside the home by responding sheriff's deputies.

Los Angeles County Fire Chief Daryl Osby is providing details on the shooting of two firefighters at the fire station in Agua Dulce.

Officials say they still need to confirm the suspect's cause of death, but no deputies opened fire on the suspect and it was believed no one else was home at the time.

The first shooting victim, identified by family members as Tory Carlon, was pronounced dead at the fire station. He was described as a 44-year-old firefighter who had worked for the county fire department for more than 20 years.

"He was a brave, committed, loyal member of our department," county Fire Chief Daryl Osby said.

The wounded captain is 54 years old and has not been identified by name. The captain was airlifted by helicopter to Henry Mayo Newhall Hospital in Valencia, where he underwent surgery and was described as recovering in critical but stable condition.

"We received one firefighter in this tragedy, a gunshot wound victim," said Dr. Louie-Marc Contreras, with Henry Mayo Newhall Hospital. "Which we took to the operating room and stabilized him. He's in critical condition. All life-threatening injuries have been addressed and the recovery process is ongoing at this time."

"I stand here with a heavy heart," Osby said at an afternoon briefing. "Today is truly a sad day and a tragic day for the Los Angeles County Fire Department."

After the shooting, the suspect is believed to have fled in a white Toyota Tundra pickup truck to his home in Acton, where a barricade situation ensued. The structure, located in the 2600 block of Bent Spur Drive, later erupted in flames.

Firefighters on the ground did not initially attack the fire, refraining from approaching the house due to the apparent threat posed by the suspect.

Los Angeles County sheriff's deputies were staging at the end of the driveway as massive flames and thick black smoke emanated from the single-story structure.

An Acton resident described authorities' response to a dramatic fire at the home of the suspected gunman after a fatal shooting at a fire station in Agua Dulce.

No nearby homes were threatened in the isolated area, and the possibility of a wildfire seemed low due to the visible brush clearance surrounding the burning house. There were no strong winds in the area.

Fire helicopters were performing multiple water drops from above as the roof collapsed.

Shortly after 1 p.m., sheriff's deputies in an armored vehicle began making their way up the driveway toward the home.

By around 4 p.m., most of the flames were out and firefighters were continuing to spray water on the smoldering wreckage of the home.

In response to news of the shooting, L.A. County Supervisor Kathryn Barger said she was on her way to the Agua Dulce fire station. "My heart is with our @LACOFD firefighters and the families of those affected," she tweeted, using the Fire Department's Twitter handle.