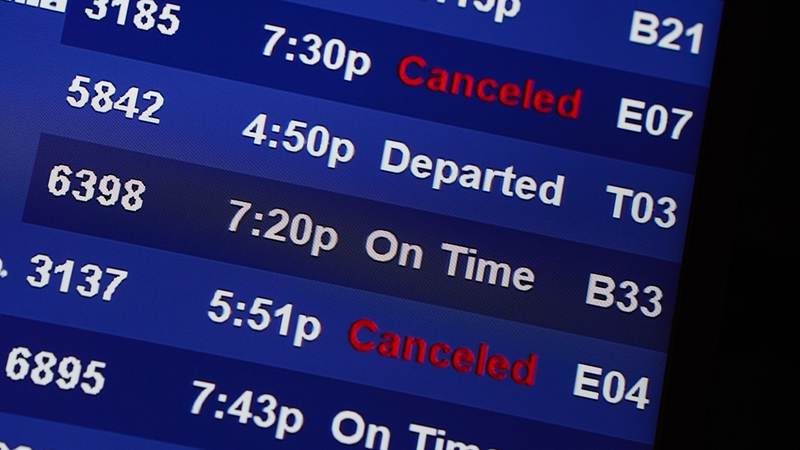 What to do if your flight is canceled

NEW YORK -- A rise in cancellations during the busy holiday travel season has left thousands of passengers around the country stranded in airport lounges as they attempt to get back home.

Airline representatives said that the recent surge in omicron COVID-19 cases has grounded flight crews, and as a result, they don't have enough people to fly their scheduled flights.

While such a predicament is hard to plan for, travel experts say affected passengers still have options to reach their destination, or in the worst-case scenario, ride out their extended stay with as little hassle as possible.

"It's frustrating for travelers but that is not a lot they can do to avoid it," Brett Snyder, the president of the travel planning service Cranky Concierge, told ABC News.

More people are stranded after the holidays as airlines canceled hundreds of flights for the fifth consecutive day amid omicron-fueled staffing shortages.

Snyder said the most important thing for passengers to do is to be on top of their airline and flight status. The affected airlines have been updating their information to customers and airport agents as soon as they know a cancellation is coming, but if one is on top of their flight early, they have more time to figure out their next steps, Snyder said.

"Speed is your friend," he said. "If you could avoid waiting at the airport and making your arrangements sooner, you'll be better off."

Scott Keyes, the founder of Scott's Cheap Flights, told ABC News that if a flight is canceled after you've arrived at the airport, there are plenty of options to get another flight fast.

Keyes said it is important to get on the ticket agent line quickly, as available seats are given on a first come, first serve basis. He advised passengers to also get in touch with their airline's customer service office while waiting in line, so that they can arrange another flight.

Keyes said some stranded passengers may have some success by calling the airline's international phone centers instead of the U.S. one.

"You can call any one of those alternative centers and patched through to an agent who will handle your reservation just the same as a U.S. agent," he told ABC News.

Keyes noted that the current number of cancellations by the airlines is roughly 5% of their flights, so there is a good chance that a stranded passenger could get another flight to their destination soon, even if that includes connecting flights. He added that passenger cancellations, such as those from people who have to quarantine, also open up the opportunity for standby positions.

Snyder said that the major airlines have agreements with each other and can offer passengers flights to destinations with another carrier.

"You can always get your money back and buy another ticket with that money," he said. "Just know what your airline's refund policies are, because some may not give you your money back until a few hours after the cancellation."

In the worst-case scenario, where a passenger has to wait long for the next flight, the travel experts say there are options to accommodate a passenger's extended stay.

Most airlines will offer a food and hotel voucher and others will oblige requests for one to a passenger whose flight is canceled. Keyes stressed that not every airline will offer it willingly.

"It never hurts to ask. Make sure you make that request proactively," he said. "They're not required by federal law to put you up, but most of the time they will be able to."

Keyes said that some credit card companies do offer travel protections for canceled flights that were booked on the card.

"Being able to be reimbursed for that hotel room is more preferable than paying out of pocket," he said.

Snyder said air passengers should also be on the lookout for other forms of credit and reimbursement from the airlines. In the past, during mass cancellation events, airlines have offered credit for a future flight or frequent flyer miles.

"We've seen airlines do this when they have abnormal meltdowns," he said.

Snyder and Keyes both said that there will likely be more cancellations because of omicron-related staffing shortages as the recent surge continues, and passengers who are preparing to fly for the next month need to be prepared for it to happen.

Both stressed that this is an uncertain time and the best way to get through any sudden cancellations is to remain as calm and composed when speaking with airline agents or other personnel.

"These agents have been dealing with thousands and thousands of unhappy, irate travelers and they have been doing it so mercilessly throughout the pandemic," Keyes said. "It's not their fault that the flight is canceled and if you can treat them with kindness, often times that will go far in their willingness to help you out."