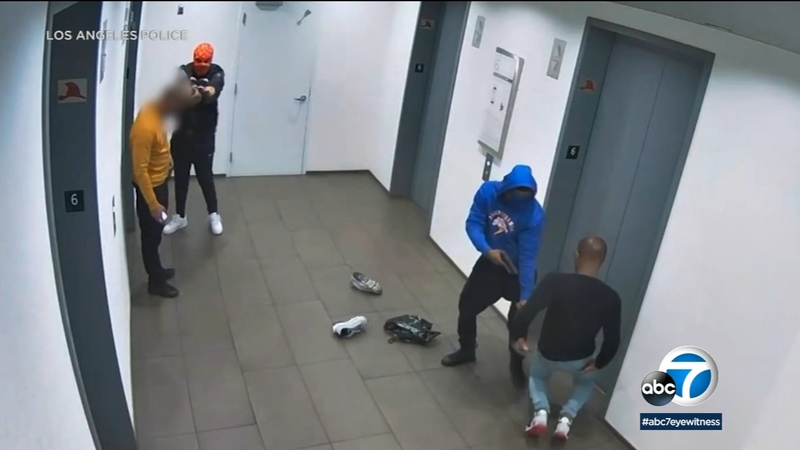 LOS ANGELES (CNS) -- A man was arrested in connection with a pair of armed follow home robberies in downtown Los Angeles and Calabasas, and two other suspects remained at large, police said.

Jamar Stewart of Los Angeles was arrested on Jan. 26 for "multiple counts of robbery'' and police are searching for 18-year-old Kenneth Bonds and a third unidentified suspect, according to the Los Angeles Police Department.

Stewart, Bonds and the third suspect in a black Volkswagen Tigaun allegedly entered a parking structure in the 1200 block of South Flower Street, near Crypto.com Arena, about 8 p.m. on Dec. 11 and followed two victims as they exited their vehicle and walked to a lobby elevator, surveillance footage showed.

As the victims waited for the elevator, two suspects armed with handguns and wearing ski masks -- one of which was later identified as Bonds -- exited the Tiguan and approached the victims, demanding their property at gunpoint, according to the LAPD.

The suspects took the victims' jewelry, phones and keys, and one suspect fled the scene in the victims' vehicle while the other suspects fled in the Tiguan. The stolen vehicle and a phone were recovered "a short time later.''
5th suspect arrested in deadly follow-home robbery outside Sunset Blvd. restaurant in Hollywood
EMBED More News Videos

A fifth suspect has been arrested in connection with a series of follow-home robberies and the fatal shooting of a man near a Hollywood restaurant.

A few hours after the first crime, a second robbery was reported in the 23500 block of Calabasas Road near the 101 Freeway, according to the LAPD.

During the second robbery, a victim was pistol whipped after he initially refused to hand over his property, and a witness who approached to offer aid had her purse stolen by the suspects.