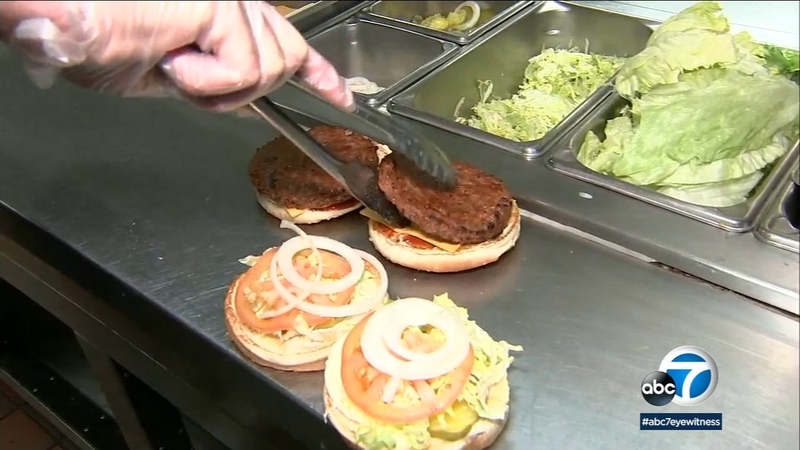 EL SEGUNDO, Calif. (KABC) -- Vegan foods are becoming a menu staple at many local restaurants, and some fast-food chains are teaming up with a plant-based food producer to expand menu options.

Ethan Brown, the founder and CEO of Beyond Meat, is selling its plant-based burgers at over 1,000 fast-food locations nationwide, including a Carl's Jr. in El Segundo.

"Fast food really isn't about salads, it's about burgers and fries," Brown said. "So what if we can create a burger that's really healthy so people can have the benefits of plant-based eating but have it in the format of a delicious satiating meat burger?"

You're going to see more moves like this one. In a new survey by the National Restaurant Association, almost 2/3 of the 650 chefs said that plant-based burgers and sausages are going to be a top food trend in 2019.

"We try to stay in front of the trends as much as we possibly can, so it really is a matter of us keeping our finger on that pulse, and we feel that Beyond is a great partner to do so," said Carl's Jr. marketing manager Newton Hoang.

Just down Sepulveda Boulevard at Islands Fine Burgers & Drinks, the Impossible Burger, another plant-based meat, is on the menu. It's one of nearly 300 restaurants in the Los Angeles area that offers it.

Beyond Meat and Impossible Burger are competitive, but they're aiming for the same goal: make money while helping people, animals and the environment.

McDonald's is testing out their McVegan burger overseas, but it is not yet being offered in the United States.

"We want to be that group of humans that have separated meat from animals," Brown said. "And if we can, at the end of the day, look back on the work we've done over many decades. To achieve that and have done that is a pretty substantial feat."
Report a correction or typo
Related topics:
food & drinkel segundolos angeles countyfast food restaurantveganburgershealth food
Copyright © 2021 KABC-TV. All Rights Reserved.
More Videos
From CNN Newsource affiliates
TOP STORIES