Police chief to 89-year-old left helpless by FedEx driver: 'I got your back' 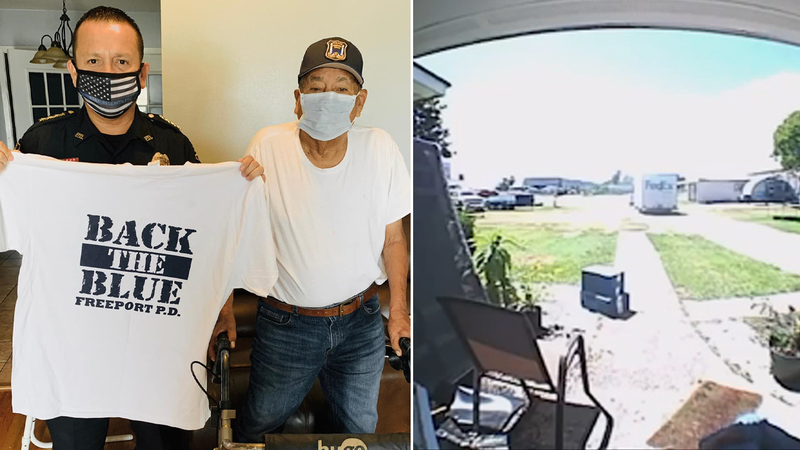 FREEPORT, Texas -- After an 89-year-old Freeport man got no help from a FedEx driver to get up from a fall, the Texas town's police chief sent the elderly resident a message: my officers and I will pick you up.

On Tuesday, the Freeport Police Department posted photos from Chief Ray Garivey's visit with Salomon Corona, who was captured on a doorbell camera asking for help from the delivery driver.

"There was some confusion with a delivery driver who came to Mr. Corona's house and was unable to assist him," the police department said on its Facebook page.

Of the chief's visit, Freeport PD said Garivey went to check on Corona and gifted him with a "Back the Blue" T-shirt and a police department ball cap.

"(Chief Garivey) assured Mr. Corona that Freeport PD was there for him in case he ever needed assistance and also provided the family with his cell number to call him direct," the post added.

Over the weekend, Corona's pleading with the unidentified driver went viral. The elderly resident was on his front porch when the interaction took place.
"Hello, help please," the man could be heard saying. "Give me a hand. I need to get up."

"I can't do that, boss," the driver said from a distance.

The 89-year-old man had fallen approximately 15 minutes before the delivery was made, according to his daughter, who added that her father has dementia and trouble with his legs.

After the incident, FedEx issued the following response:

"We extend our thoughts and concerns for the well-being of the person depicted in this video. The safety of our team members and customers in the communities that we serve is our highest priority. We are reviewing the circumstances behind this incident and will take the appropriate action."

Ring doorbell video showed the exchange between the two as a delivery was being made. The man laid there another 10 minutes before his daughter arrived.