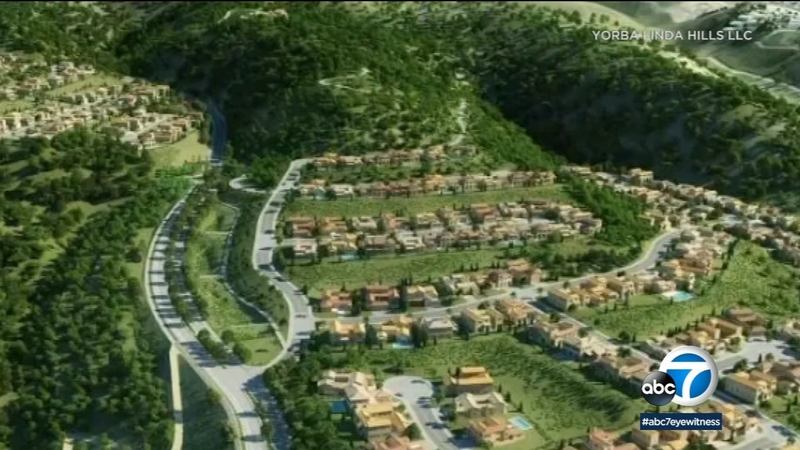 With approval from the Orange County Board of Supervisors on Aug. 27, the developer of Esperanza Hills, Yorba Linda Hills LLC, moved forward with plans to fill 469 acres of the chaparral-covered hills with 340 homes, priced at an estimated $2 million.

This is the same area where the 2008 Freeway Complex Fire wreaked havoc on the Orange County community, destroying 187 residences and damaging another 127.

Those opposing the development project were concerned most with how to get in and out in case of an emergency.

Doug Wymore with Yorba Linda Hills LLC told Eyewitness News one road would serve as daily in and out access for the proposed community. Wymore said to the west of the development, there will be a second emergency road; both will go into the Stonehaven Drive loop.

Yorba Linda resident and Hills for Everyone member, Brian Gass, opposed the project.

"Residents came to us concerned in Yorba Linda about the Esperanza Hills project," Schlotterbeck said.

"We have learned a lot of lessons, whether it's from the Camp Fire or the Tubbs Fire, that you need multiple ingress and egress options to evacuate. We know from the 2008 Freeway Complex Fire that the streets that we're standing on right now were completely gridlocked with the existing residents that were here," Schlotterbeck said.

Fire Marshal Lori Smith with the Orange County Fire Authority said the developer went above and beyond state and local requirements to meet fire code.

"Our fuel modification zones are larger. Our roadways are wider. We have staging areas for our apparatus, so that the firefighters can pull into the neighborhood while the neighborhood is evacuating," Smith said.

Smith admitted, Esperanza Hills residents would be in a very high severity zone, but in homes better equipped to take on flames.

"They'll be getting the best that we know that science will produce to show us how to build a house in the wildland, how to put a plant palette in, how to give them appropriate ingress-egress," Smith said.

If the project moves forward, Hills for Everyone asked for two daily access points and a reduction in home density -- no more than 240 homes on the same acreage.