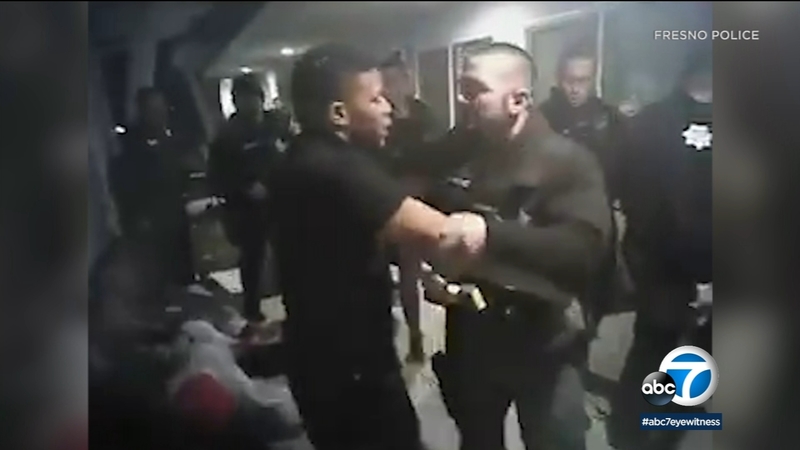 FRESNO, Calif. (KABC) -- Allegations of excessive force are being aimed at a police officer in Fresno after bodycam video shows a teen being repeatedly punched.

This video shows officers at an apartment complex looking for wanted gang members.

After one teen is frisked and told to sit down, an officer jumps on him and starts punching him multiple times.

Audio transcript from police body camera:
"Attention, apartment 204, this is the Fresno Police Department. If you're inside make your presence known."

BODY CAM FOOTAGE: Several body cameras recorded the confrontation, which is now the subject of an internal affairs investigation.

The teen was initially charged with resisting arrest, but after seeing the bodycam video, prosecutors have now dropped all charges.

Fresno police have now launched an internal affairs investigation, and Wallace has filed an excessive force lawsuit against the department.

"It's a very disappointing situation. You can see London Wallace crying. You can see him bleeding," said attorney Nolan Kane.

London Wallace had no gang connections and no criminal history.

"He's a high school kid. He likes playing basketball. He's a nice, calm, timid person," Kane said. "And you can kind of see that in the video. He's not used to police contact."

Officer Christopher Martinez wrote in his report that he thought Wallace was going to try to run away. He said he punched Wallace three times in the face, which let the officer get his back off the second story balcony railing.

"But in this case, the kid was patted down. There was nothing there," Torres said. "And I don't see anything that was consistent with an officer basically putting his fist right through his face."
Nolan Kane says it's important for the public to see the body camera footage so they can get the full picture, which often benefits police, but not in this case.

"In this case, it's not going to be London's word against the officer's word. The jury's going to get to see the full footage and they'll be able to decide whether this is something that's acceptable," Kane said.

"I can tell you after looking at the video that it is disturbing to see what occurred in the video," Dyer said.