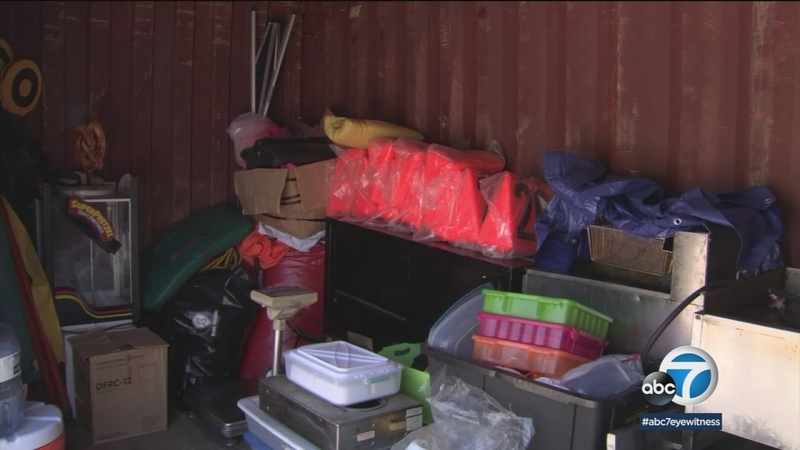 Thousands of dollars in equipment stolen from young OC athletes

The theft has left parent volunteers and children devastated.

"It's just terrible," said parent volunteer Cheree Goodfield as she looked at what was left in the storage unit that sits inside Ralph B. Clark Regional Park, which straddles Buena Park and Fullerton.

Goodfield's three children are among more than 400 kids who belong to the non-profit organization.

"Why would people do that. They know that's part of the children," said Goodfield's 14-year-old daughter Rosabella Chavez, a cheerleader with the Fullerton Bears.

League officials received a call from a park ranger at 7 a.m. Sunday notifying them that thieves broke into their storage containers, said Fred Jung, a Fullerton Bears board member. Jung said the suspects broke the locks to get into the storage units.

"They took our spirit gear that we sell to raise more money for the league," Goodfield said.

The culprits also stole a blower for the league's inflatable tunnel used for the start of each game, a speaker system, propane tanks for the snack bar, as well as four generators that are needed in just over two weeks for the league's fireworks stands, which are vital for fundraising.

"It is critical. It is 90 percent of what we do in terms of our scholarship fund," Jung said.

Board members said it allows dozens of low income children to play for free.

"We do it as a courtesy to their parents, or grandparents sometimes, because their parents are either passed away or in prison or addicts," Jung said.

Parents said the league offers more than just a sport.

"We make these kids feel about as special as we can. They feel confident, and their self-esteem is higher," Jung said.

"It's a lot of fun," said Natalie Lira, 13, a Fullerton Bears cheerleader. "Cheer is everything for me. I have no free time. It's cheer, cheer, cheer."

The league has suffered several break-ins over the years. In 2016, thieves stole more than $20,000 worth of equipment from containers stored outside Buena Park High School.

Parents said they felt more secure after moving to Ralph B. Clark Regional Park since it's gated. However, park officials said this time, thieves stole the park gate lock and chain, then headed to the storage units.

Parents said fortunately, football helmets and other player equipment were being refurbished elsewhere at the time - so they were not stolen. The value of what was taken is estimated at $6,500.

"Obviously, we would love to have the stuff back but at this point it's just, stop targeting our league," Goodfield said.

So far, parents said they don't know what they're going to do to raise money. The season starts in less than a month.