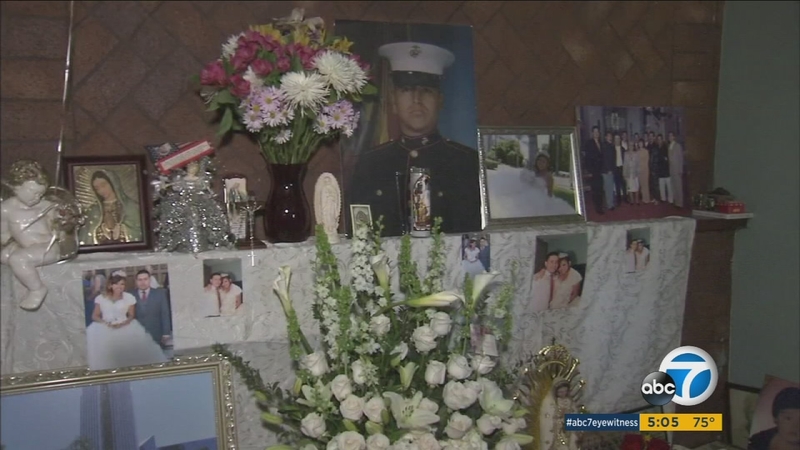 LA HABRA, Calif. (KABC) -- An Orange County couple is weathering a fresh tragedy after losing their two youngest children in a car crash.

More than 10 years ago, their eldest son was killed by a roadside bomb while serving in the military overseas.

Maria and Fidencio Tinoco lost their 17-year-old daughter Valeria and their 23-year-old son Oscar Diaz Tuesday. They were killed when Oscar lost control of the Lexus he was driving and slammed into a tree near the intersection of Rosecrans Avenue and Camino Loma in Fullerton.

Her first child, Marine Lance Cpl. Hugo Lopez, died from injuries suffered in a roadside bomb explosion while he was on active duty near Iraq.

Maria said she doesn't know what's giving her the strength to go on.

Valeria was just 6 and Oscar was 12 when they spoke with Eyewitness News about their older brother.

"He always used to joke around with us and play with us," Oscar said as he sat on the couch with his family in 2006.

Maria said after her eldest son's passing, Valeria and Oscar grew closer. They were hardly ever apart.

Oscar was picking Valeria up from soccer practice the night of the crash that claimed both of their lives, Maria said.

"I was just shocked initially because we (saw) her just the day before," said Allegra Torres, who attends La Habra High School, where Valeria was a senior. "We held a moment of silence today to just acknowledge her and pay our respects."

"She was lovely. She always had a smile for you," said family friend Zoila Gonzalez as she sat next to Maria in the family's La Habra living room, surrounded by flowers and photos of all three children.

Maria said Valeria hoped to become a veterinarian. Oscar worked in a warehouse and lived at home.

Friends have set up a GoFundMe page to pay for funeral expenses.

"How can you comfort a mother that has lost her three kids? You can't really say anything," said Gonzalez.

Police say an investigation is still underway, but they believe speed was a factor in the fatal crash.