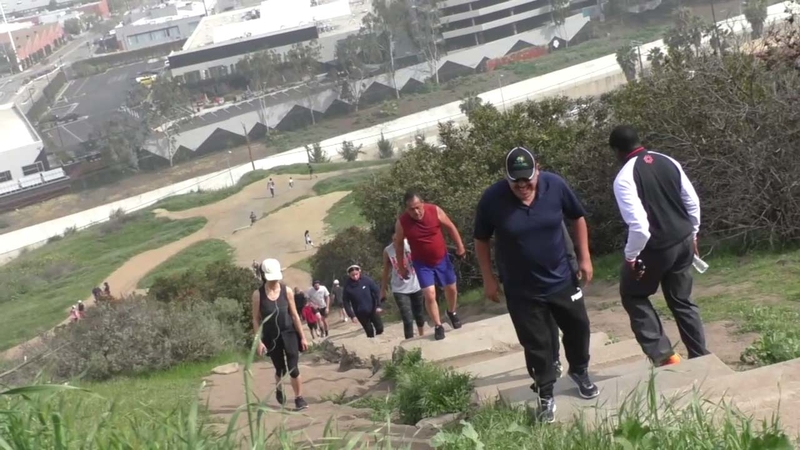 LOS ANGELES (KABC) -- It was an uphill battle, literally, as climbers and their supporters worked muscles and lungs at the Baldwin Hills scenic stair climb.

They're getting ready for the American Lung Association's "Fight for Air Climb" Saturday in downtown L.A., where nearly 800 people will climb 1,393 stairs of the AON Center to raise money and awareness.

The American Lung Association's Amanda Gutzwiller says many are surprised at just how prevalent lung disease is.

"A lot of people don't know lung disease affects one in seven people," Gutzwiller said. "There's about 23,000 people every year who are diagnosed with lung cancer who are never smokers."

This is ABC7 news writer Danielle Garcia's fifth year participating in honor of her mom, who died of lung cancer a few years ago.

She's also is the driving force behind the ABC7 Circle of Health team, which I'm excited to be part of as well.

"You'll be surprised on the day of the climb to read some of the stories and they just immediately bring tears to your eyes," Garcia said.

Armen Ghazarians of Finish Fit mobile training not only donated but came down to lead the stretch on training day.

"We want to contribute and be a part of it and help raise money for the fund," said Ghazarians.

Also inspiring is Susan Rorke of Reseda who said she's participating for the first time this year, despite some physical challenges.

"I quit smoking a year and a half ago after 48 years of smoking which is how I got COPD," said Rorke.

She trains in the nine-story building she works in, going up seven times each practice, as the Fight for Air event is 63 floors high.

Last year over 30,000 people participated in 52 climbs, and they raised over $8 million to find a cure. This year the American Lung Association is hoping L.A. will raise at least $300,000.

Asthma, emphysema, COPD and lung cancer; the ALA continues to fight for those affected by lung disease.

"If you can't breathe that's it, game over," said Rorke.