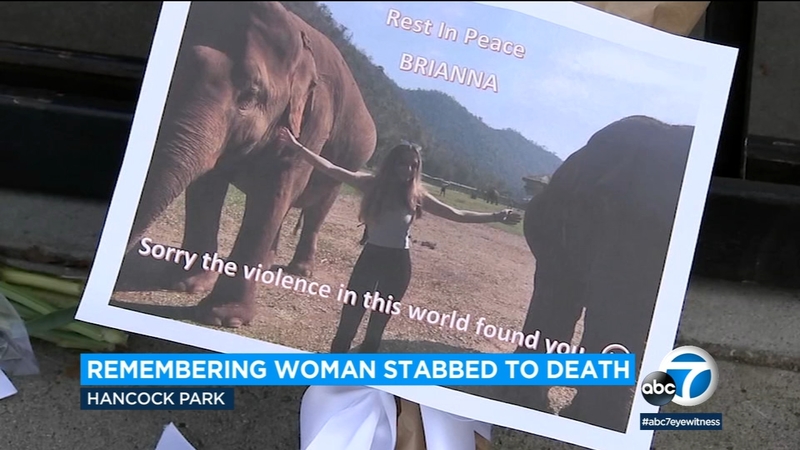 Still, he left flowers and a note outside the Hancock Park furniture store that reads "sorry the violence in this world found you." From his home, Harding has a view of the alley where the suspect was seen leaving the store after fatally stabbing Kupfer.

"As I work from home, I just look out the window constantly just to see what is that individual doing? Are they just walking through, or are they looking in someone's car trying to find a door that's open to a back gate. I took my dog for a walk at the time that this happened and I have a little guilt, if only I had walked at a different time, I might have been able to help identify the individual that did this violence to an innocent individual just doing her job," Harding said.

LAPD detectives say the suspect was not known to the victim and the motive is unclear.

An employee of a furniture store in Hancock Park was stabbed to death by a man still on the loose, Los Angeles police said.

Herman Hinks works as a security guard across the street from the Croft House furniture store.

"I see her every morning. She come in, she opens the shop. Real friendly woman. She'll look back and wave. Everybody over here is friendly. We look out for one another in the area. Keeping a close eye out. Just because there is a lot of transients that come through," said Hinks.

Kupfer, who lives in Pacific Palisades, was working alone. Her body was discovered by two customers who entered the store just before two in the afternoon.

"I saw them walk out and I just see sheer terror. She was screaming like 'Oh my God, oh my God.' At that point, I was trying to make my way over. There was too much traffic. By that time, police came from everywhere. When I walked that way, you could see through the window and when I looked down, I said oh my God, that's the young lady that works at the store."

Based on evidence discovered by detectives, the suspect is believed to be homeless. According to ABC7 analysis of data from LAPD's open data website, about 10% of the nearly 400 homicides in 2021 reported by LAPD had a homeless suspect. That same data shows homicides overall have increased by more than 50% since 2019.