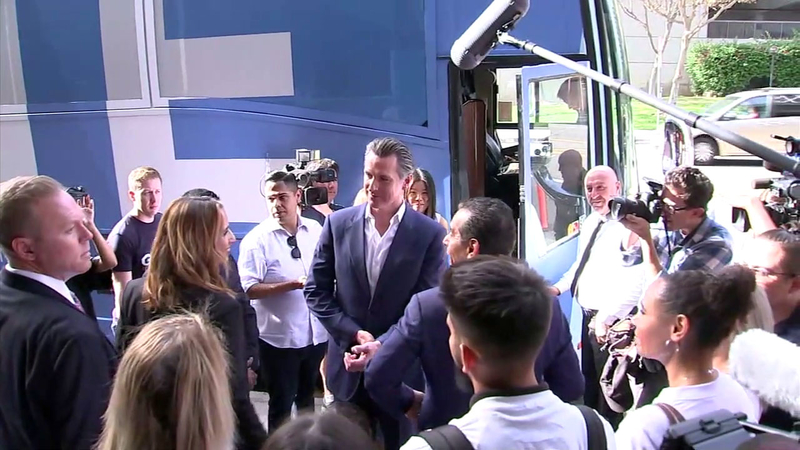 DOWNTOWN LOS ANGELES (KABC) -- Gavin Newsom and former Los Angeles Mayor Antonio Villaraigosa were out in downtown Los Angeles as part of Newsom's Get Out the Vote bus tour.

Newsom ate tacos with his ex-rival Villaraigosa as they continued to campaign just days before Nov. 6. With the election only days away, Newsom's bus tour is driving across the state to get out the vote.

"You cannot take things for granted. The past, everything we've done to get to this point doesn't necessarily predict the next five days," Newsom said.

The current lieutenant governor is up against wealthy San Diego businessman John Cox, who is a big supporter of repealing the state's gas tax. If Prop 6 brings voters to the polls, that could help the Republican candidate.

Newsom said voters would be making a big mistake if they passed the repeal.

"Public safety projects, thousands of jobs that are currently employed and underway - all that will be stripped away with absolutely nothing in return, no other strategy being offered by those that want to repeal that tax," he said.

Newsom, who is ahead in the polls, will spend the weekend campaigning for down-ballot candidates, including Democrats in tight races in Republican-held congressional districts.

Outside of Grand Central Market, Eyewitness News met Sandra Guerrero, who calls herself an Independent and is undecided on the governor's race.

"I don't like what's going on, actually, in the world, and what's going on with the elections and what people have decided. That makes it hard for me because I'm like, 'Well I don't like your decision.' It's affecting me. So I want to vote for the right person," she said.

She added that she's going to read up on the current election and talk to family members.

Cox will be in Pacoima for a meet-and-greet on Friday.