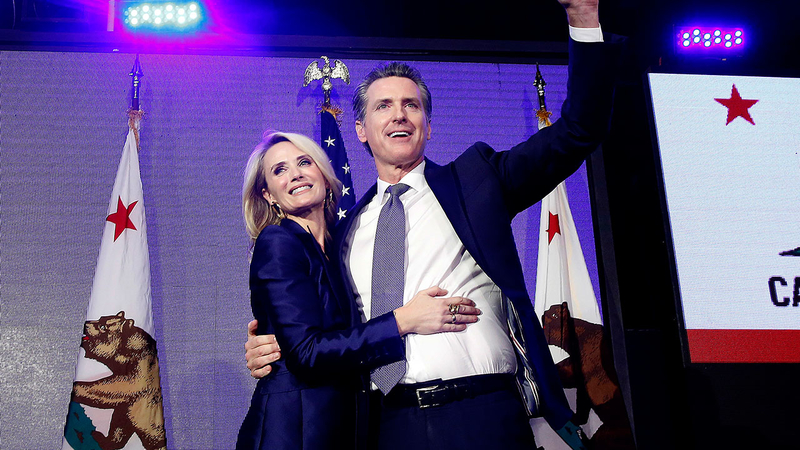 LOS ANGELES (KABC) -- Lt. Gov. Gavin Newsom, a Democrat who is largely expected to continue many of the policies of Gov. Jerry Brown, has overwhelmingly won election to the California governor's office over Republican businessman John Cox.

Newsom was widely predicted to win in a state in which registered Democrats outnumber Republicans by about 3.8 million.

His election marks the first time since the 1880s that Californians have elected Democrats as governor for two consecutive terms.

RELATED: Who is Gavin Newsom?

One of the dominant themes in Newsom's candidacy was his willingness to battle President Donald Trump over issues such as the environment and immigration.

As he delivered his victory speech in downtown Los Angeles, Newsom delivered a message that at times seemed directed at Trump.

"To those agents of anger determined to divide us instead of unite us, it's time to pack it up and for you to pack it in."

Newsom, 51, is a former mayor of San Francisco who first gained national attention in 2004 when he ordered city officials to issue marriage licenses for same-sex couples before gay marriage was legal in the state.
EMBED More News Videos

Cox had not previously held elected office, but had made bids in the past for Congress and the U.S. Senate. He had described himself as a self-made millionaire who grew a business from scratch to employ nearly 100 people.

The 63-year-old from San Diego had campaigned on issues that included ending California's status as a sanctuary state, repealing the gas tax increase and fighting special interests in Sacramento.

RELATED: Who is John Cox?

Shortly after calling Newsom to concede, Cox spoke to supporters in San Diego and said he was proud of his campaign effort.

"I consider myself very proud that we highlighted the incredible struggle that the people of this state have had for years under the people that are running this state," Cox said.

"Let me tell you this Republican Party will be back in this state. And our path to success is going to be based upon delivering the quality of life that people need so desperately."