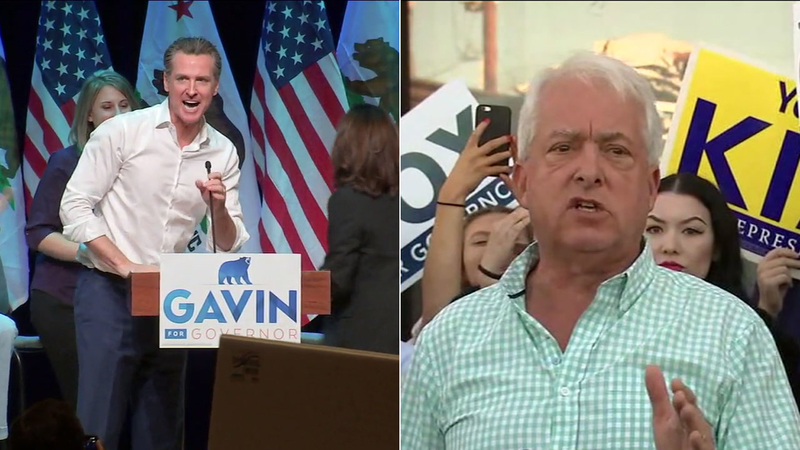 CA gubernatorial candidates hold rallies in SoCal ahead of election

SANTA CLARITA, Calif. (KABC) -- In the run-up to Tuesday's election, the race for California's next governor is in full swing.

"The world is looking to California at this moment to make the right decisions," Newsom said.

Hill is running against incumbent Steve Knight to win the 25th District, which includes parts of Los Angeles and Ventura counties.

"This is just the beginning of the fight," Hill said at the rally.

One goal of Saturday's "Courage for a Change" bus tour was to encourage Democrats to retake the House of Representatives.

Meanwhile, Republican candidate John Cox's "Help is on the Way" bus tour also made multiple stops in Southern California, encouraging people to get out and vote.

"Our message is very simple. This state has not been run well. It is unaffordable, it is unlivable," Cox said. "We are going to be the change that's going to make this state affordable and livable."

At his first event of the day in Fullerton, the businessman endorsed congressional candidate Young Kim, who is running against Gil Cisneros for the 39th District. The district is mostly in Orange County but includes parts of Los Angeles and San Bernardino counties

"We cannot continue to have dysfunction in Sacramento or in Washington, D.C.," Kim said.

Cox said despite trailing in the polls, he's confident that his supporters will turn out in force.

"We say enough is enough," Cox said. "We want a state that's affordable, and we're going to get it when I'm the governor of this state."

A record number of voters are expected to cast ballots Tuesday. More than 19 million Californians have now registered -- the largest number in state history.

Learn more about the upcoming election at abc7.com/vote.