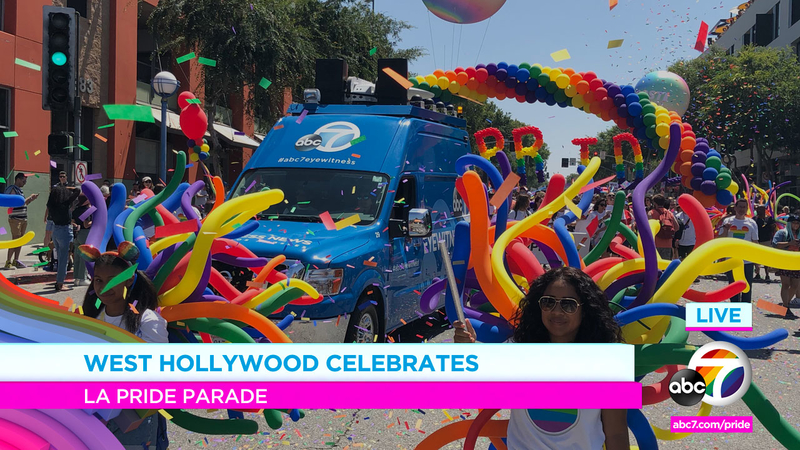 ABC7 is proud to be the broadcast partner for the L.A. Pride Parade, bringing the annual event in West Hollywood to television for the first time ever.

The parade coverage was hosted by Eyewitness News anchors Ellen Leyva and Brandi Hitt, and they were joined by Raven-Symone, star and executive producer of Disney Channel's "Raven's Home."

"We're proud to bring the LA Pride Parade celebration to viewers across Southern California," said Cheryl Fair, president and general manager of ABC7. "Our collaboration with LA Pride is a commitment to reflecting and serving the diverse communities that represent our audience."

The two-hour broadcast aired live on Sunday, June 9, from 11 a.m. to 1 p.m. Phill Wilson was the community grand marshal, and the Los Angeles LGBT Center was the organizational grand marshal.

"I am honored to be a part of this year's Pride celebration," Wilson said. "The LGBTQI community has come a long way in the last 50 years. It has not been without heartache, pain, sacrifice and growth. I am humbled to be among such a powerful and diverse group of grand marshals. Together we represent how much stronger we are when we celebrate all of what we are."

The parade was one of the nation's largest and most notable Pride celebrations, with hundreds of thousands of people lining the parade route to celebrate the heritage and diversity of the LGBTQ+ community and their allies. This year's theme was #JUSTUNITE.

In the days surrounding the parade, L.A. Pride hosted events and programming celebrating the LGBTQ+ community, including:

LGBT Night with the L.A. Dodgers at Dodger Stadium on May 31

L.A. Pride Festival and Pride on the Boulevard on June 8 and 9.