Tear gas, flash bangs and rubber bullets were deployed during confrontations between officers and the protesters.
KABC 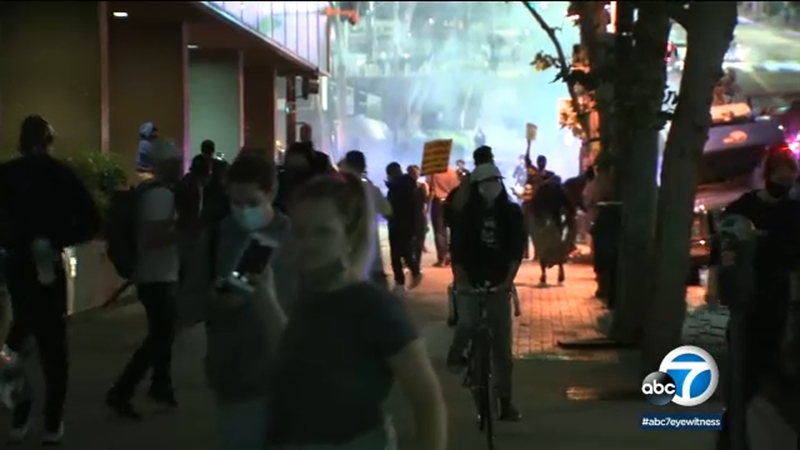 LOS ANGELES (KABC) -- Two officers were injured during confrontations with protesters who marched through Downtown Los Angeles Friday evening over the death of George Floyd.

The demonstration started out as a mostly peaceful protest, but escalated around 7 p.m. with some protesters seen confronting police and vandalizing property, vehicles and businesses including a Starbucks on Spring and 6th streets.

The protesters walked through streets chanting "I can't breathe" and onto the 110 Freeway near the L.A. Live venue.

Some protesters began to sit on the northbound 110 Freeway near 6th and 7th streets and stop traffic.

The California Highway Patrol shut down the southbound lanes but traffic was not moving in either direction of the freeway.
EMBED More News Videos

Two officers were injured after confrontations with protesters who marched through Downtown Los Angeles Friday evening over the death of George Floyd.

Tear gas, flash bangs and rubber bullets were deployed during confrontations between officers and the protesters.

One of the injured officers suffered a broken hand and another suffered a head injury. Both officers are expected to make a full recovery, according to the Los Angeles Police Department.

As the confrontation between police and protesters continued to escalate through the night, the LAPD declared the protest an unlawful assembly.

The LAPD asked all businesses in the downtown area to close due to the protests as officers tried to disperse crowds.

Protests erupted nationwide on Friday following the death of George Floyd in Minneapolis. Protesters in major cities were seen swarming the streets and rallying in-front major establishments, including the White House.

Josh Einiger has the latest details on the death of George Floyd, which has sparked nationwide protests.