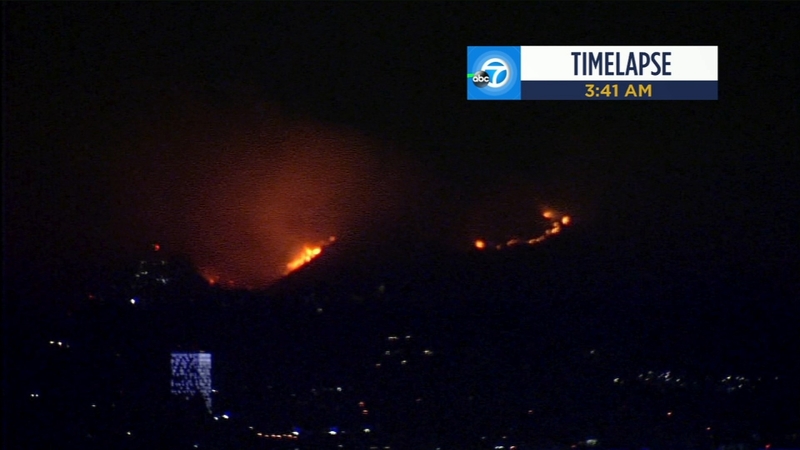 LOS ANGELES (KABC) -- The Getty Fire began around 1:30 a.m. Monday on a hill along the 405 Freeway near the Getty Center museum.

Driven by dry terrain and Santa Ana winds, it grew quickly, forcing thousands of evacuations and destroying a number of homes.

An ABC7 camera stationed at Los Angeles International Airport caught the first flames rising from the hills in the distance around 2 a.m.

A zoomed-in time-lapse video of the fire's progression shows the flames continue to spread around the hills and get brighter and larger as time goes on. The 30-second video shows about six hours of the flames' growth.

Then as day broke, the video shows heavy smoke pouring up into the skies and blowing over a wide swath of the city's Westside.

Firefighters say the fire scorched more than 600 acres by noon, but at that point they were able to prevent it from spreading further.

Some 1,100 firefighters were continuing to fight the fire well into Monday night using a mix of ground crews and aircraft dropping water and flame retardant.

Dozens of schools were closed Monday amid the danger from the flames and air quality.