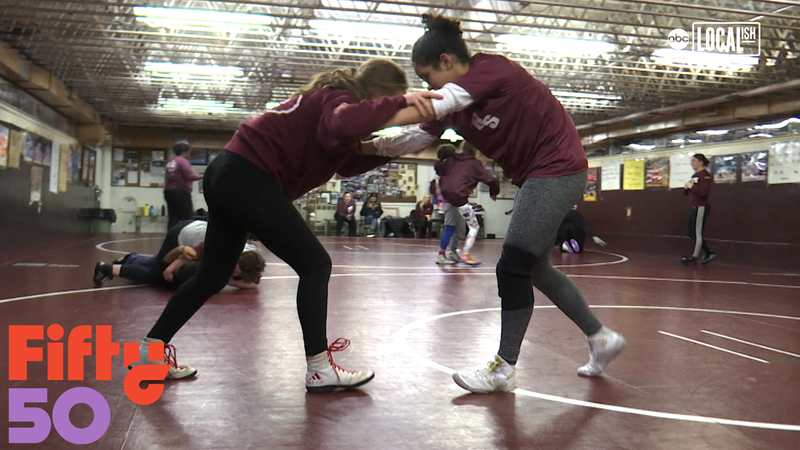 BAY SHORE, New York -- ABC Owned Television Stations and ABC's Localish present 50 inspiring stories from around the country for Fifty/50, as part of The Walt Disney Company's monumental initiative highlighting the 50th anniversary of the passing of Title IX, the federal civil rights law that prohibits sex-based discrimination in any educational institution that receives federal funding, and gave women the equal opportunity to play. This story was originally published in January 2021.

When you think of wrestling, the thought of a team of girls isn't the first thing that comes to mind. However, Head Coach Amber Atkins who has been active in the wrestling world for more than 15 years, begs to differ.

This past year, Atkins created Bay Shore High School's first-ever all-girls varsity wrestling team and for Atkins, this accomplishment was everything she could ever want for the sport.

"Growing up there was maybe 2 to 4 girls on all of Long Island when I wrestled," said Atkins. "Now I'm able to have an all-girls team it's kind of like an incredible feeling. It's something I wish I had when I was younger."

To Atkins, wrestling is a family affair, since her father coaches the boys' team at the same school. Her father also coached her when she was one of the only girls on the team.

Atkins and her father actively work together to grow the program, so that everyone can have a chance to be included in the sport that means so much to them.

"It feels good because we're making a difference," said wrestler Kassidy Mcleod. "No one expects girls to wrestle, but we're showing them, yeah we can. We can do anything."

"I want more schools to have their own teams," said wrestler Katalina Villalba. "I think it's just a great opportunity for everyone."

Atkins is looking forward to next year's season and is happy to expose more girls to the world of wrestling which for anyone who wants to try it out, no experience is necessary!

"I tell them every day I'm with them is the best day of my life," said Atkins. "It's something that I dreamed of and now it's happening."