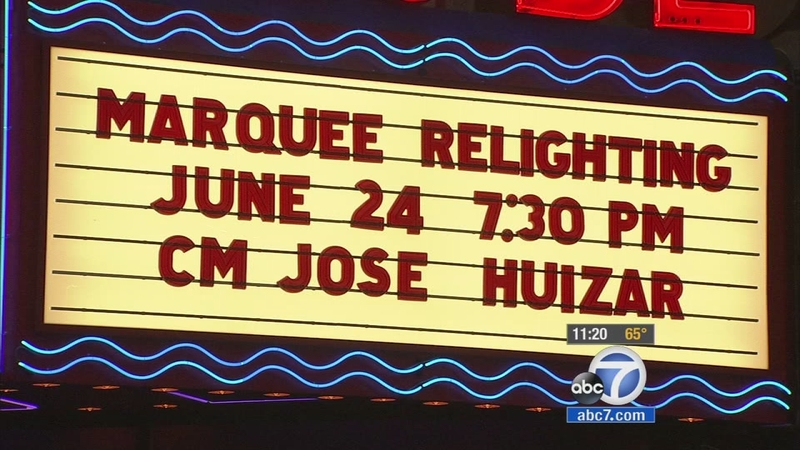 DOWNTOWN LOS ANGELES (KABC) -- With the flick of a switch, the newly restored Globe Theatre marquee is now operational again for the first time since the 1980s.

The relighting ceremony was another celebration for "Bringing Back Broadway," a 10-year plan that's slowly changing the face of a street that was once the heart of L.A.

Los Angeles City Councilman Jose Huizar is the driving force behind it.

"In downtown Los Angeles, we have so much history that has been forgotten, abandoned and neglected, and we're doing more and more now to revive that history," Huizar said.

The neon sign is one of dozens Angelenos will eventually see lighting up Broadway. The plan also calls for expanded sidewalks for more of a plaza feel.

The downtown street cars are also returning, just like in the old days.

"It tells me that the city is alive, that Broadway is coming back to life after many years of neglect," Bill Givens, president of the L.A. Historic Theatre Foundation, said. "We've got a councilman that really cares about this area and we're about to see something really happen here."

The operator of the Globe Theatre, Erik Chol, says they hope to open within three months.

"The Globe Theatre is going to have all kinds of events, fashion shows, corporate events, film premiere, live concerts, and so on and so on," Chol said.

It's still a work in progress, but "we are announcing that Broadway is open for business once again," Huizar said.

Some building owners on Broadway are reportedly getting grants so they can light up their buildings' beautiful architecture.