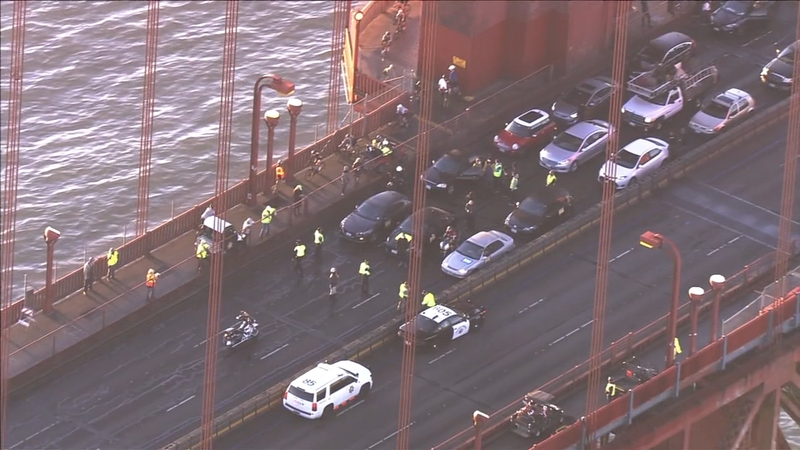 SAN FRANCISCO -- A protest early Thursday morning shut down traffic on the Northbound side of the Golden Gate Bridge. The activists who stopped traffic say they are fighting for a path to citizenship for all.

CHP officers first got the call at 6:57 a.m. that several cars were driving very slowly across the bridge. The calls then stated that about a dozen cars were stopped.

Organizers say 40 undocumented families and allies blocked the bridge. They planned to block the bridge for 20 minutes to represent what they say is 20 years of broken promises by lawmakers on this issue, specifically calling out President Biden, Vice President Harris and House Speaker Nancy Pelosi.

"Immigrants deserve a path to citizenship now and we can't wait another 20, 30 years," said Luis Angel Reyes Savalza, one of the organizers.

But the protest did not go exactly as they planned.

"We held the bridge for 20 minutes. We were ready to clear traffic. But the CHP prevented undocumented families from clearing the traffic. This is completely on the CHP who decided to blockade the protestors and prevented us from leaving," he said. Instead, they were on the bridge for about an hour.

The CHP says that's because the activists didn't leave when they were ordered to. Then it became a situation of detaining them and moving them to Vista Point, where police arrested 5 people.

The group is angry that immigration reform is not included in the budget reconciliation bill. But the CHP says blocking the bridge is not the way to express outrage.

The CHP has detained protestors who shut down the northbound side of the Golden Gate Bridge this morning. Activists say they have been told they are going to be arrested for obstructing a freeway and not obeying an officer. pic.twitter.com/fOy1Z5I1ZU

"Yes people have the right to protest but not when it comes to roadways and freeways. This is a very dangerous place to be, especially when you get people out of their vehicles," said CHP Officer Andrew Barclay.

"This is the only way we are going to be heard. We have done everything. We have followed the rules. No one is listening to us," said Brenda Zendejas as she was taken away in handcuffs.