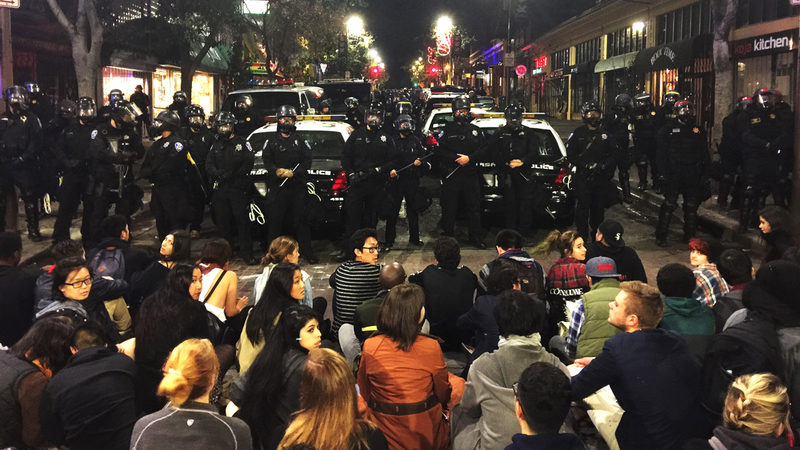 Protests over a grand jury's decision to not indict a police officer in the chokehold death of Eric Garner turned chaotic Sunday night in Berkeley and Oakland.

Five people were arrested in Berkeley's protest. Nearly all of the windows were broken at a McDonald's restaurant on Shattuck Avenue in downtown Berkeley, just one of several businesses that were damaged overnight.

Protesters also set fires in the streets. Police were busy trying to put out the fires before they spread.

There was dissension in the group, while some turned violent, others yelled for them to stop. The violent agitators broke windows and looted stores, including a Radio Shack and a Whole Foods.

While it appeared police were taking a hands-off approach, some protesters complained of rubber bullets and batons being used.

"I tripped over a woman who had fallen down, and I stopped to help her, my back was to the police line, and I was lifter her up I looked over my shoulder and saw the officer raise his baton," said protester Cindy Pincus.

The protests started peacefully and organizers promised it would stay that way, but Shattuck Avenue has a lot of cleaning up to do Monday morning after several businesses were damaged.

Officers made contact with the protesters about 9 p.m. as the protesters blocked eastbound lanes of state Highway 24. At one point, the Claremont off-ramp to the highway had to be closed due to the protests.

The CHP reported five patrol cars sustained broken windows and dents during the protests. Officers said protesters tried to light a patrol car on fire and threw rocks, bottles and concrete at officers.

This is one of the #CHP patrol vehicles damaged by the protestor group this evening. pic.twitter.com/8Z1DSUY0oC