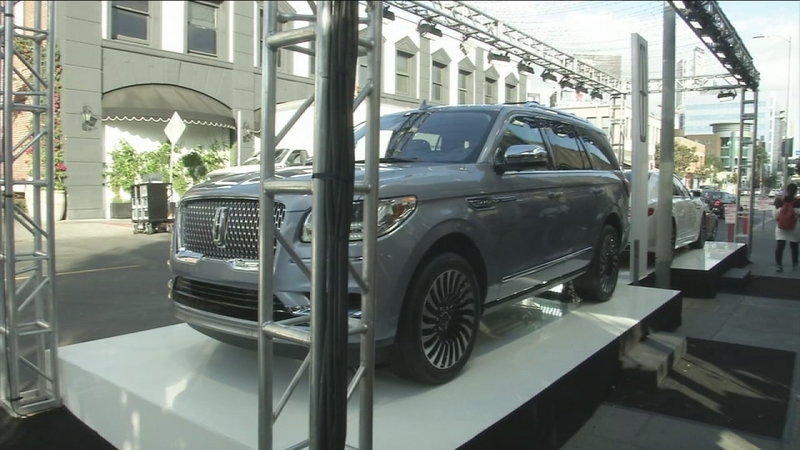 DOWNTOWN LOS ANGELES (KABC) -- The banners were up outside the L.A. Convention Center in downtown, and crews were hard at work inside.

The doors don't open until Friday, but the auto industry has already rolled into town.

"Coming here and being part of the L.A. Auto Show is really critical for us as a brand, as a place for us to go out and launch great new products," said Megan McKenzie, marketing manager for Lincoln Motor Company.

Lincoln has taken over a hip corner of Hollywood, with vehicles in and around the new Dream Hotel on Selma Avenue. They'll be unveiling a new vehicle at the show's press days. But it's under wraps for now, hoisted up onto the hotel's roof for some press previews. Even with a sheet on it, it's quite obvious that it's an SUV, which is a really hot segment right now.

"We've had a really great year as far as crossover vehicles. It is the way the SUV segment is growing in general, whether it's the small segment the MKC participates in, or where the Navigator is, there's a lot of excitement there," McKenzie said, without revealing the new vehicle's actual name or positioning in their model range.

Suffice to say, it will be a good fit for Lincoln's showroom lineup and in their display at the auto show.

Meanwhile, Subaru is keeping its big debut under wraps - quite literally. Parked outside a huge tent on the L.A. Live Event Deck, a heavily camouflaged SUV. It's a three-row crossover called the Ascent, which will give Subaru a toe-hold in the family vehicle segment.

Also roaming around between rehearsals, several golden retrievers of all sizes. Subaru is being tight-lipped about how the dogs will come into play when they debut the Ascent Tuesday evening.

"When you come to L.A., all the other brands are here. You have to make a difference. You have to stand out, and we think we've found a way to do it," said Michael McHale, head of communications for Subaru of America.

Just seeing the four-legged performers out having fun between rehearsals, they should be the star of the auto show's press week. And right at home in a Subaru.

"We have this brand that is very different from other brands. You know, we work a lot with dogs, they're very much a part of our brand. So maybe we'll do something different with that tomorrow night," McHale said.