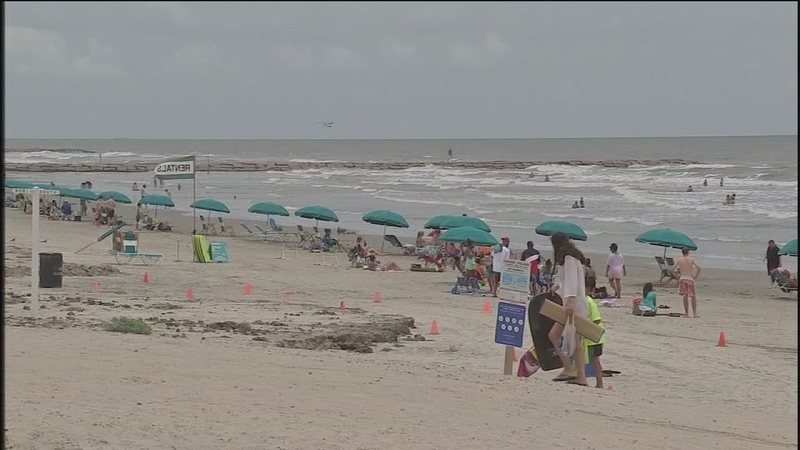 GALVESTON, TX -- Texas health officials are warning beachgoers that higher levels of bacteria have been found at multiple beaches in the Galveston area in the Gulf of Mexico.

Water quality on beaches is measured throughout the state to keep track of bacteria levels in the water. Following weeks of heavy rains in Texas, officials said they have found high levels of Enterococci bacteria in 17 beaches in the Galveston area. Enterococcus is a kind of bacteria that often occurs naturally in the intestinal tract of humans and animals. Currently, 23 beaches in Texas have high levels of the bacteria, officials said.

"The simple truth is that all of that is running down the river," said Davis, who said the bacteria can turn Gulf water into almost toilet water. "It sounds bad to think of it like that."

The Freeport Fire Department sent out an advisory warning of "medium" bacterial levels at Bryan Beach. In Galveston, levels tested even higher. The Galveston County Health District is now advising people to avoid swimming in some beaches altogether because of what's in the water.

"If there's that concern, then I'm also concerned. I don't want my family to get sick," said Yolanda Conrad, who had been swimming with her children most of the day.

The Conrad family is among the hundreds of people who are enjoying the surf on a hot summer day. Many of them are oblivious to the orange flags that indicate the presence of an environmental hazard. The problem, many beachgoers say, is that the orange flags and placards do not reveal enough information.

"I can see the flag and read the sign that says there is an air or water quality hazard, but that doesn't tell me much. They should update their signs or flags so that we know there's bacteria without having to ask a lifeguard, or have to go online once we're already at the beach," Conrad explained.

For its part, the Galveston County Health District has put up signs and orange flags at 17 out of 52 locations where water samples revealed significantly high levels of bacteria.

Health officials measure bacteria in what are called Colony Forming Units or CFU's per 100 ml. Federal standards say that anything over 104 CFUs is dangerous. Along some beaches in Galveston, bacteria levels climbed to more than 140 CFUs.

"What we want to do is give people the information so they can make their own decisions. For me, healthy adult, I go swimming all the time, I wouldn't worry about it. But if I had open wounds or my immune system was compromised, I'd have second thoughts," said Peter Davis, chief of beach patrol.

The main concern about swimming in waters with high levels of contamination is infection. The most common one is gastroentertitis. Symptoms of that include, chills, nasuea, diarrhea and fever.

Polluted water can also cause viral infections, such as infectious hepatitis.

Health and environmental officials say that increased levels of bacteria are common after heavy rain storms.

Galveston health officials said that it will likely be at least several more days until the water quality improves. They say they will continue to test the water on a daily basis.