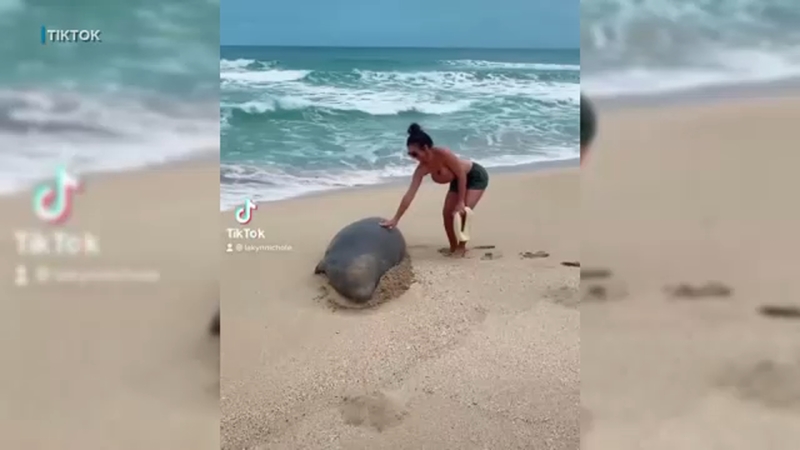 KAUAI, Hawaii -- A viral TikTok video of a tourist disturbing a Hawaiian monk seal is renewing calls for the state to educate visitors.

With the islands seeing more than 30,000 travelers a day on average, many residents say they're fed up with what they call acts of disrespect.

The Hawaii Tourism Authority and the Department of Land and Natural Resources have ongoing education campaigns, including flyers, signs, ads, and videos to tell tourists not to trespass or touch wild animals.

But while the vast majority of visitors are respectful of protected areas and wildlife, some people are still not getting the message.

When the social media post of a Louisiana woman disturbing a sleeping monk seal on Kauai went viral earlier this week, the backlash was swift.

"We were outraged to see the behavior of this individual. Obviously, it's a federal offense," said HTA Chief Brand Officer Kalani Ka'ana'ana.

The National Oceanic and Atmospheric Administration says it's investigating the incident.

Kauai County Prosecuting Attorney Justin Kollar said: "Harassing a monk seal in the manner depicted in the viral video is a Class-C felony under Hawaii law (statute HRS 195D-4.5) punishable by up to five years in prison and a $10,000 fine. We have reached out to our federal partners at NOAA as well as our state partners at DOCARE, and the matter remains under investigation."

In 2019, HTA and DLNR released a series of Malama Hawaii public service announcements. DLNR spokesperson Dan Dennison said at the time, the videos were offered on airlines' in-flight entertainment systems and on hotel closed-circuit TV systems in rotation in about 35,000 hotel rooms around the state. It's unclear which airlines continue to offer the videos.

A Hawaiian Airlines spokesperson confirmed it offers the DLNR PSAs on its in-flight systems. The carrier also has a "Travel Pono" educational program.

The issue, Ka'ana'ana says, is travelers are not mandated to watch any PSAs. Although they're available on airlines, hotels, even on ads online and on social media, unless you're looking for them, you won't know they're there.

"We cannot control all the bad apples, but we're doing everything that we can to make sure that the message about respectfully viewing wildlife is in compliance with the law, and also just supporting what's pono and what's right," he said. "One of the hurdles that we are facing is there's no mandatory landing video that the state requires, but it's something that is available to visitors on the infotainment systems."

"Maybe watching a video is not enough," said state Senator Bennette Misalucha, vice-chair of the Committee on Energy, Economic Development and Tourism. She supported a Senate resolution last session to require travelers to sign an official document acknowledging certain rules, similar to the Department of Agriculture form required on all flights.

"Having tourists do a pledge, and that pledge will allow them to respect our cultural values as well as making sure that they're aware of the fragility of our surroundings," she said.

The Senate resolution failed to pass the House, but she says the latest wildlife violation could renew interest.

"Is that something that we can consider? I think the devil will be in the details," she said.

As for the monk seal violation generating all the backlash, Stefanie Gutierrez, NOAA Pacific Islands Regional Office spokesperson, sent this statement to KITV-4: "We are aware of the video and have referred it to the NOAA Fisheries Office of Law Enforcement. OLE is actively investigating the incident. Anyone with information should contact the NOAA OLE hotline at (800) 853-1964.

Hawaiian monk seals are protected under the federal Endangered Species Act and Marine Mammal Protection Act, as well as Hawaii Revised Statute 195D. There are only about 1,400 estimated alive today. Actions that harass, harm, pursue, capture, injure, or kill the animals can be punishable through fines or jail time.

To view protected monk seals responsibly, follow the NOAA Guidelines for Viewing Marine Wildlife in Hawai'i. Keep a safe, respectful distance of 50 feet away from seals, and 150 feet away from mother seals with pups. Stay behind any barriers or signs and follow the "rule of thumb" to determine how much space to give monk seals. Make a "thumbs-up" gesture, extend your arm out straight in front of you, and turn your thumb parallel to the ground. If your thumb covers the entire seal, you are far enough away."

Anyone who spots a seal or witnesses a human-seal interaction, call the NOAA Marine Wildlife Hotline at (888) 256-9840.

10 Things You Can Do to Share the Shore and Sea with Pacific Islands Wildlife: fisheries.noaa.gov/feature-story/10-things-you-can-do-share-shore-and-sea-pacific-islands-wildlife