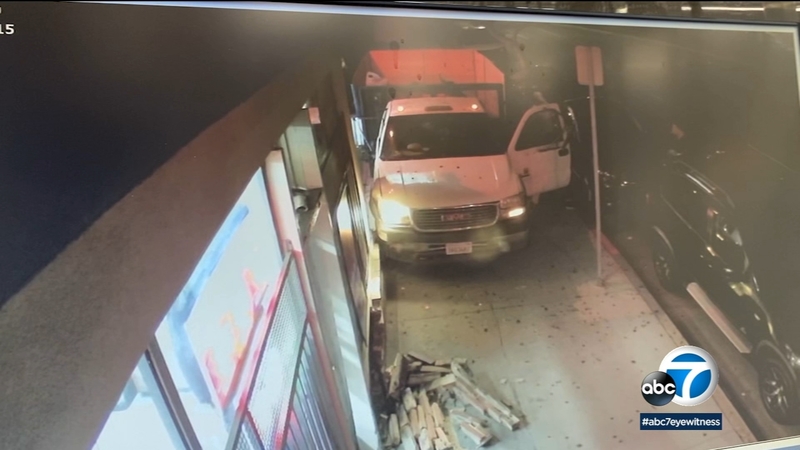 Video: Man drives onto Hawthorne sidewalk before being beaten to death

HAWTHORNE, Calif. (KABC) -- A candlelight vigil is planned in honor of the man who was beaten to death after he allegedly tried to run over people with his car outside a bar in Hawthorne. Meanwhile, his family members are speaking out.

Surveillance video obtained by Eyewitness News shows Melguin Santos drive his truck onto a sidewalk near the bar on Hawthorne Boulevard he had been kicked out of early Saturday morning. Police say he got into an altercation with the group and then tried to run the group over.

The 40-year-old first hit a tree and then crashed into a nearby business, but missed the people, authorities say. That's when police say four men pulled him out of the truck and beat him.

"Why couldn't they talk it out? Why hurt him like that?" said his sister-in-law Ilene Perez.

A group of activists and family members are now calling on city officials to introduce a reward for the arrests of the people who allegedly killed Santos.

Melguin Santos was beaten to death after he got into a fight with a group of men and tried to run them over, according to police. The activists now want the men they call "angry vigilantes" arrested.

Perez disputes the claim that her brother-in-law was trying to run the group over.

"You got it all wrong. My brother wasn't like that. He was not a killer. They killed him. He was probably trying to get away. He probably feared for his life," she said.

"My brother-in-law was a good man. He didn't deserve this. Whatever...started it, whatever took it to that situation, it shouldn't have (gone) that far," Perez said.

Tuesday's vigil for Santos is planned for 5 p.m. near the Rock It Sports Lounge in the 14200 block of Hawthorne Boulevard.