KABC
By Carlos Granda and John Kelly
LOS ANGELES (KABC) -- An ABC7 data analysis sheds new light on how Los Angeles became one of the hot spots in the spread of coronavirus.

As the COVID-19 outbreak was taking hold in China, Italy and Spain, more than 1,000 flights direct from those countries were landing at LAX.

From December through March, at least 1,080 flights left China on direct routes to Los Angeles and thousands more flew directly into other U.S. cities, according to an ABC7 Eyewitness News analysis of more than 20 million flight records obtained from the tracking service Flightradar24.

Hundreds of flights continued from China into Los Angeles well after the government imposed restrictions on flights from China.

"The United States banned travel to China 12 days after the world heard there was an outbreak of severe pneumonia in Wuhan...The problem was, it was too late," said Dr. Todd Ellerin, chief of infectious disease at South Shore Health and an ABC News Consultant. "Even though there had only been 12 confirmed cases in the U.S. on the day President Trump announces the travel ban, the reality was there were many more unconfirmed cases."

But it wasn't just China. The data analysis also shows 27 flights from Italy into LAX. At least a half dozen of them were in March, well after the outbreak was widespread in that country.

The analysis also shows 115 flights directly from Spain during that time period, dozens of them in March.

Want to view this flight map in a larger window? Click here

Dr. John Brownstein, an epidemiologist at Boston's Children's Hospital and ABC News contributor, said that such massive travel meant that the flow of the virus into the U.S. and other countries probably came quickly after it began spreading quickly in China.

"So our view is that even as early as January, we were seeing introductions of cases happening globally and specifically in the U.S.," he said.

Brownstein also said many passengers on these flights were infected either with mild symptoms or were asymptomatic.

"We were seeding this epidemic in many places, but flying blind because we weren't doing the adequate testing that was needed," Brownstein said.

Passengers at certain airports were supposed to be screened, according to Brian Sumers, the senior aviation business editor at Skift.

"But if you talk to folks who went through it will tell you there really wasn't as much screening as people expected," Sumers said.

The analysis paints a picture of how travelers could have reached points across the country. Nationally, the flights directly from China, Italy and Spain reached at least 15 states. Additionally, during the same period, the cities that took in at least 100 flights from China, Italy and Spain were the starting point for flights to every state in the country.

And even now, airlines continue to operate flights across the country. According to Sumers, it's because "the U.S. government wants them to."

"Last week, many of the major airlines said they would take $25 billion in grants from the government to pay their people and in exchange the airlines said they would keep flying to every destination that they serve," said Sumers.
Report a correction or typo
Related topics:
health & fitnesslos angeleslos angeles countydata journalismcoronavirus californiacoronaviruscovid 19 pandemiccovid 19 outbreakcovid 19
Copyright © 2020 KABC-TV. All Rights Reserved.
CORONAVIRUS CALIFORNIA 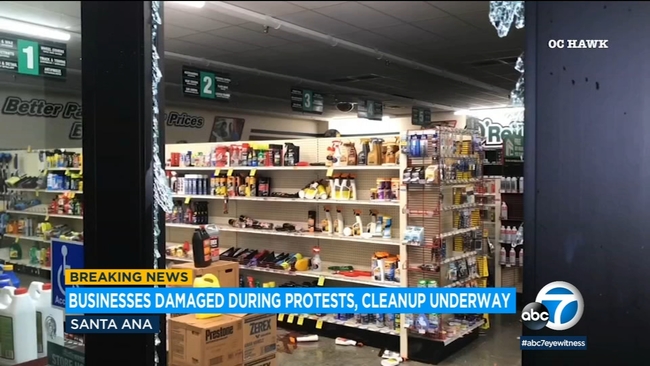 LA, other cities issues curfew in anticipation of more protests