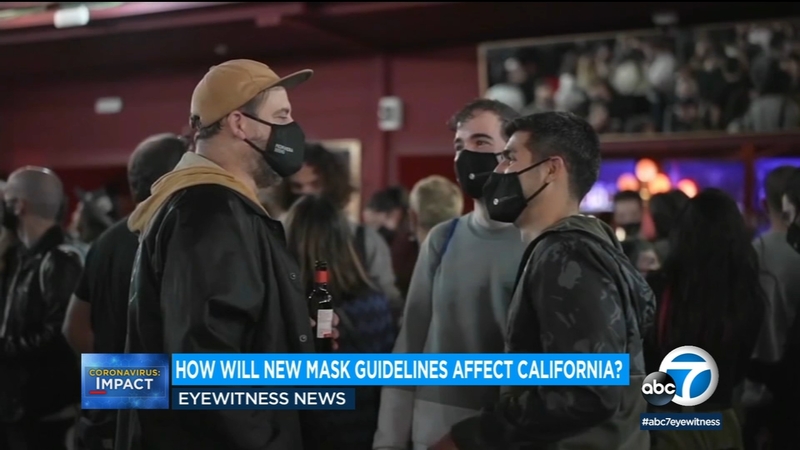 It wasn't clear heading into Friday when and whether California would adopt new health guidelines after the federal government said fully vaccinated people can quit wearing face coverings and social distancing in most situations outside or inside.

Counties across California are waiting for word from the state on potential new guidance following Thursday's announcement by the Centers for Disease Control and Prevention. The CDC still calls for wearing masks in crowded indoor settings, such as buses, planes, hospitals and prisons, and says residents should follow local rules. California's Department of Public Health did not immediately respond to requests for comment.

Gov. Gavin Newsom said the state is on track to fully reopen its economy next month, signaling an end to most pandemic restrictions as infection rates stay at record lows and more people get vaccinated. On Thursday, the state began allowing children 12 to 15 to receive the vaccine.

People fully vaccinated against COVID-19 can ditch masks in many circumstances, the CDC says, but some people aren't quite ready to remove their face coverings yet.

"I think that the question that's top of mind for many people is: What does this mean when people are going around their day-to-day business?" she said. "I know people are going to be impatient now and they're gonna say, 'Time to get on this. Just eliminate all these requirements around masking.' That wasn't the intent of CDC. I think the CDC wrote in multiple places that people really do need to adhere to worker protections and to state and local directives."

Trader Joe's and Walmart announced Friday that they are both dropping their mask mandates for fully vaccinated shoppers following the new guidance.

Shopper Denise Kennedy, who has decided not to get the vaccine because of a pre-existing condition, says if she walked into her local Trader Joe's and shopper were mask less, she would go to another store.

"I would still wear a mask in any store, around people, because you don't know that someone's vaccinated. They can just pretend, it's like their showing proof of that," Kennedy said.

Local directives will come from counties, as well as the California Department of Public Health and Cal/OSHA.

At least 60% of residents 16 and older are partially vaccinated in California. But the percentages of people vaccinated vary widely by county and across the country. There's also no way to know who is vaccinated or who is just saying they are.

"I think this is early," Marin County public health officer Dr. Matt Willis said on KGO-TV, KABC's sister station in San Francisco. "Frankly, the idea of people not covering their faces indoors when they're gathered together, it's concerning that there would be ongoing transmission."