The inmate died at a hospital after contracting the coronavirus at the California Institution for Men in San Bernardino County, the state Department of Corrections and Rehabilitation said in a statement.

No further details were released to protect the inmate's medical privacy, and next of kin was notified, the statement said.

Statewide, 115 inmates and 89 corrections employees have tested positive for the coronavirus as officials work to prevent outbreaks among California's most vulnerable populations, including people living in nursing homes, on the streets or in homeless shelters.

California released for the first time details about nursing homes facing outbreaks as the numbers of COVID-19 cases and deaths across the state continue to rise on Sunday.

The information released by the Department of Public Health on Friday showed nearly 260 skilled nursing facilities with more than 3,000 total positive cases among patients and staff.

More than 140 care facilities in L.A. County have reported one or more COVID-19 cases. One of the worst outbreaks is at the Brier Oak on Sunset facility in Hollywood, which reported that 80 residents and 62 staff members tested positive for the virus.

Redwood Springs Healthcare Center in Visalia, a town in the agricultural Central Valley, was another one of the hardest-hit facilities with 91 residents and 46 staff members who tested positive.

Skilled nursing facilities are a particular concern because of the age and health conditions of residents, and their close living arrangements. Outbreaks have been reported in facilities in much of the state, and dozens of residents have died.

Facilities have limited visitors since March. Workers said they now undergo temperature checks and fill out questionnaires before their shifts to try to limit the spread of the disease.

Meanwhile, prisons were following isolation and quarantine guidelines laid out by the U.S. Centers for Disease Control and Prevention and tried to increase physical distancing at housing units by bringing in tents, cots and temporary bathrooms. Already, 3,500 inmates received early release to reduce overcrowding.

For most people, the coronavirus causes mild or moderate symptoms, such as fever and cough, that clear up in two to three weeks. For some, especially older adults and people with existing health problems, it can cause more severe life-threatening illness, including pneumonia.

RELATED: 'None of us want to die in here': Chino prison inmates speak about COVID-19 fears

As of Sunday, the state had recorded nearly 31,000 confirmed cases and more than 1,150 deaths, according to John Hopkins University. Los Angeles County, where most of the state's cases are clustered, announced 24 additional deaths and 334 new cases on Sunday. It was a sharp drop from the previous day, when the county reported its highest one-day total of 81 deaths and 642 new cases. The county's public health director has cautioned that the drop may be due to the lag in test results because of the weekend.

There are concerns the virus could sweep through the state's 150,000 homeless people, many of whom have chronic health conditions and lack safe places to quarantine themselves. San Francisco reported a large-scale outbreak at a homeless shelter after more than 100 people tested positive, including 10 staff members.

The state is on its way to acquiring nearly 16,000 hotel rooms to house the homeless during the pandemic, and already more than 4,200 people have been moved out of shelters or off the streets into hotel rooms, Gov. Gavin Newsom said Saturday.

"We've certainly flattened the curve. The question is when are we going to see those numbers start to decline on a consistent basis as opposed to an episodic basis," he said.

Newsom, who made solving the state's homelessness crisis a priority even before the pandemic struck, announced Project Roomkey two weeks ago, a program in which the federal government will pay 75% of costs associated with housing some of the homeless. It covers people who test positive or may have been exposed to the virus, older homeless people and those with underlying health conditions.

In Los Angeles, where more than 30 homeless people have tested positive for coronavirus, medical teams will begin screening people for the virus on the streets, along with fast-result field tests, Mayor Eric Garcetti said. Those who are infected will be offered transportation to shelters and have hotel rooms set aside for them. Garcetti said L.A. has started receiving its first trailers from the state to house the homeless.

Additional resources will be directed to Skid Row, the epicenter of the homeless crisis in the city. A high capacity pop-up testing clinic operated by the L.A. Fire Department will be set up there and will include transportation to isolation and quarantine beds.

There have been signs the outbreak is slowing in the month or more since most of the state's 40 million residents were ordered to stay at home. Social distancing rules are being praised for that development, but they have hit the economy hard, shutting down schools, tourist spots and most restaurants and retail businesses.

Some have chafed under the restrictions, including dozens of people who rallied in San Diego and Orange counties over the weekend against California's stay-at-home order.

Ventura County on Saturday modified its stay-at-home order to permit some businesses that don't serve the public to operate using no more than 10 employees. Gatherings of up to five people are now permitted, as are gatherings in vehicles, the county said.

To start lifting restrictions and allow businesses to reopen statewide, Newsom has said California needs to test 25,000 people a day and better track those who are infected. The state is testing about 20,000 people a day now. Several areas have begun offering tests to people without symptoms. Until now, there has been a shortage of test swabs and the chemical agents needed to process the tests. 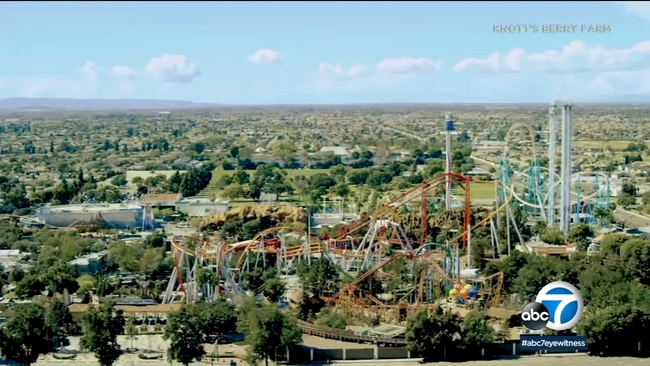