Can a medical condition make it too difficult to wear a mask?

One doctor couldn't think of any single breathing issue in which wearing a mask would cause a problem.
KABC
By Denise Dador
LOS ANGELES (KABC) -- Public health experts are advising people to wear a face covering to help stop the spread of COVID-19, but some people are pushing back, resorting to grocery-throwing tirades and medical excuses. Doctors are now explaining why masks keep us safe and how angry outbursts don't help anyone.

Pasadena Internal Medicine specialist Dr. John de Beixedon describes what he saw in a viral video of an irate shopper at a Trader Joe's in North Hollywood. The woman claims she refused to wear a mask because she has a respiratory issue.

"The lady claiming that she could not breathe in a mask was actually sort of funny," he said. "Because while she was yelling at people, she was obviously not having a breathing problem. She was spreading droplets everywhere."

De Beixedon said if someone does have a breathing issue or a condition of concern, "You wouldn't want to go out and do your shopping anyway. You would want somebody else to do it for you."

He couldn't think of any single breathing issue in which wearing a mask would cause a problem.

"The only medical disorder that I could think that would stop you from wearing a mask was extreme claustrophobia or an anxiety-type situation," de Beixedon said.

"Any surgeon, any nurse, any lab tech or anyone who works in a job that requires them to wear a mask would be passing out," ABC's Chief Medical Correspondent Dr. Jennifer Ashton said. "So let's try to keep it to fact and not fiction here because people's lives are really at stake."

A mask is a filter. It lessens air flow giving some people the feeling of air hunger. But, instruments like a pulse oximeter can demonstrate that masks don't impair oxygen intake.

"They are basically made for the exchange of gas," said de Beixedon.

The idea behind wearing a face covering is to inhibit the flow of bacteria, virus and fine particles. Federal health officials now offer new evidence about the benefits of face coverings.

"Masks both keep you from infecting others but may also partially keep you from getting infected. I think that's a new discovery and a new finding," White House Coronavirus Task Force Coordinator Dr. Deborah Birx said.

It's disheartening to see people refusing to wear masks. De Beixedon said he's had more patients test COVID-19 positive in the last 10 days than in the last three months.

"We all want our personal freedom. The way we have freedom is if we're alive to use our freedoms and use our liberties," he said. "But, we have to be alive to do that."
Report a correction or typo
Related topics:
health & fitnessface maskcircle of healthcoronaviruscovid 19 pandemic
Copyright © 2020 KABC-TV. All Rights Reserved.
CIRCLE OF HEALTH 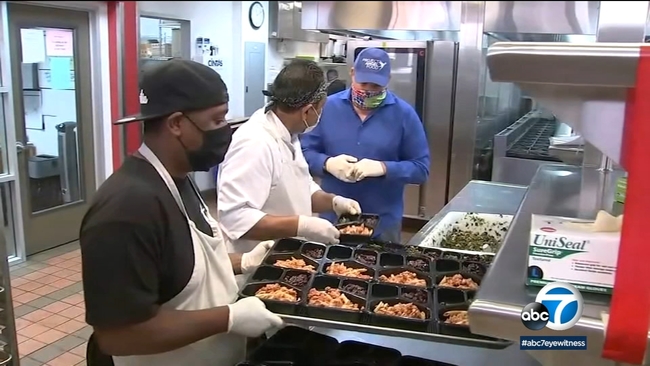