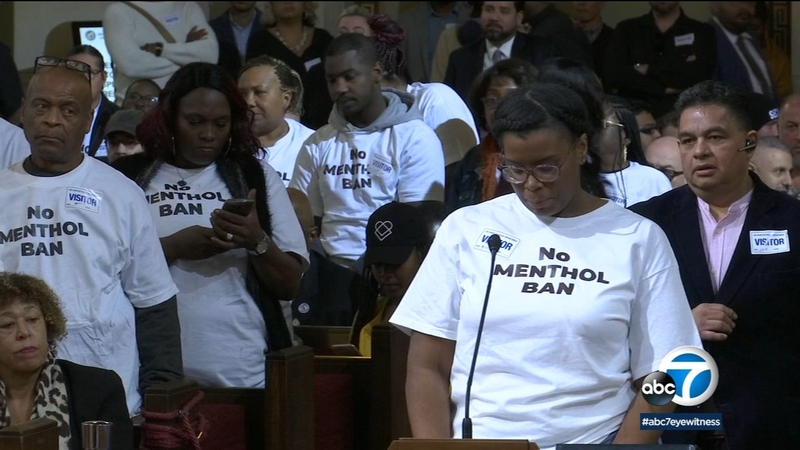 LOS ANGELES (KABC) -- After a lengthy and emotional hearing, a Los Angeles City Council committee threw its support behind drafting an ordinance to ban the sale of flavored tobacco products - not including menthol or hookah lounges - in the city of Los Angeles.

Before Thursday's vote, supporters and opponents of the ban packed the council chambers.

The opposition includes those who smoke menthol cigarettes, owners of hookah bars, and activists who don't believe a city, where cannabis is now legal, should decide what adults can smoke.

Those in favor of the ban - parents, students, and groups like the American Heart and Lung associations - are worried about the health risk.

"The FDA has had forever to take care of this and they haven't done what they needed to do so LA has to step up and make amends for it for our city. This is what we do," said Virginia Escamilla, a mother of two.

Escamila says the tobacco companies target kids like her 15 and 12-year-old.

Figures released Thursday by the CDC back that up. The national youth tobacco survey says 6.2 million U.S. middle and high school students are current users of some type of tobacco product.

"How accessible it is. How it's happening in the classroom. Kids are vaping in the classroom. They're exhaling into their backpacks. Kids are selling puffs. They're sharing devices. It's alarming how in-their-face it is. The flavors are alluring. They're getting the kids to think it's OK. And they want to figure out, oh, let's see how this one tastes," said Escamilla.

"It's better to stop the addiction now before it's too late. The addiction of nicotine affects the adolescent brain all the way to mid-20s. That affects their learning and their susceptibility to addiction," said Cal State Fullerton student Rena Mamoun.

Historically the tobacco industry has targeted communities of color and those communities in Los Angeles are divided over this issue.

"It's unjust to pit our communities against each other. The consequences of a ban will create a black market in our community and will further endanger our community. Eighty percent of African Americans utilize menthol cigarettes. We're concerned these individuals may be profiled," said Rev. KW Tulloss, president of the Baptist Ministers Conference of Los Angeles.

Those opposed highlight their concerns over how a ban would be enforced, but stress they support education and stricter rules geared toward the youth.

The hearing lasted for more than four hours. At the end, the council's health committee voted in favor of drafting an ordinance to enact the ban. After it's drafted, the ordinance will need to be approved by the full City Council.

After the hearing, Councilman Mitch O'Farrell issued a statement: "I want to thank my colleagues in committee today as we adopted my instructions to draft an ordinance that will protect young people from the devastating effects of vaping and nicotine addiction by taking flavored tobacco products off the market in Los Angeles. I also want to thank the City Attorney for the report that underscores the fact that these products are a danger to our youth. Thank you all who took time out of their day to provide public comment on this issue."
Report a correction or typo
Related topics:
health & fitnesslos angeleslos angeles countylos angeles city councilvapingcigarettes
Copyright © 2021 KABC-TV. All Rights Reserved.
TOP STORIES
OC man arrested for participation in Jan. 6 Capitol riot
Frustration as Biden, Congress allow eviction ban to expire
LA County expanding vaccine hours as COVID-19 spikes
Fauci warns 'things are going to get worse' with COVID
Fire burns 27 acres in Irwindale
Longtime soap opera actor Jay Pickett dies at 60
4 killed in helicopter crash in NorCal, NTSB investigating
Show More
Who's the toughest lifeguard in Los Angeles?
Burbank retirement home employee fatally stabbed by former co-worker
MTV marks 40 years with new 'Moon Person' design
24K gold tequila bottle sells for $300
Too late, Texas couple changes minds about COVID-19 vaccine
More TOP STORIES News