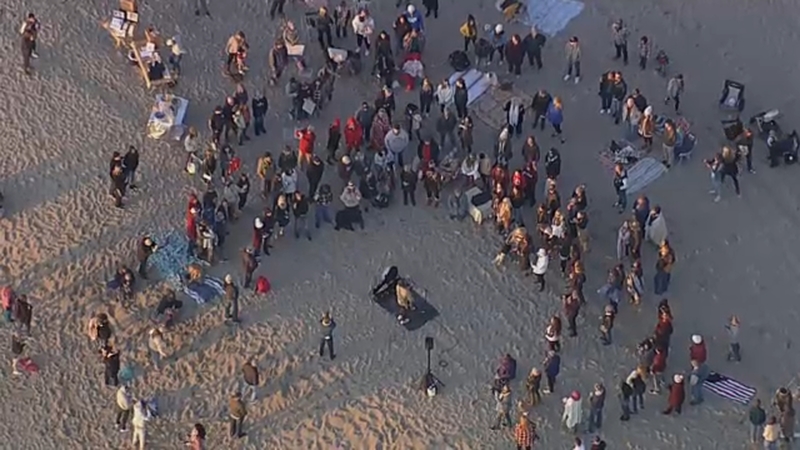 In recent weeks, Cameron has openly defied COVID-19 mandates and hosted two caroling events in Thousand Oaks as the region deals with a surge in deaths and cases. Few, if any, could be seen wearing masks or distancing from each other at those events.

Dozens of people, most of them not wearing masks, showed up for a second caroling event hosted by actor Kirk Cameron in Thousand Oaks, as the region deals with a dangerous surge in COVID-19 cases and deaths.

The 80s sitcom star planned to host another event Thursday night in Malibu.

"We're hoping that we're going to have hundreds of people here. Please come and join us by candlelight as we sing and as we pray for our country," he said in a video posted to his Instagram page.

City officials said they are aware of an unpermitted, planned event and are coordinating with law enforcement and are "attempting to reach the organizer to inform them that they cannot hold an event in Malibu."

Though it's unclear if the event was moved at the direction of city officials, groups of people were seen on the beach at Point Mugu for the faith-based event around 5 p.m. on New Year's Eve.

State Senator Henry Stern on Wednesday took to Twitter to speak out against the event.

Just dropped @KirkCameron a note seeing if he could just stay home and hum quietly to himself this NYE. We’re too busy fighting this peaking pandemic to even mourn our fallen. Please don’t make us spend more time or safety resources on profiteering/PR disguised as prayer/protest pic.twitter.com/6q0CbGNcoG

In a separate Instagram post, Cameron, an outspoken anti-mask advocate, cited the recovery rate of the virus when trying to explain why his events are justified.

"I'm not trying to endanger people, I'm outside under the stars, giving people hope," he said.

It was a similar scene over in Valencia, where hundreds packed a parking lot to ring in the new year. Few who attended the outdoor concert, hosted by Christian activist Sean Feucht, at Higher Vision Church wore masks or physically distanced.

In a statement, the church said while it wasn't an "official" church event, they provided the outdoor venue and some volunteer services.

In other areas across Southern California, much smaller gatherings took place. Car enthusiasts gathered in Pasadena for their annual New Year's Eve Rose Parade cruise, even though the world-famous show had been canceled.

Law enforcement officers responded and checked on the crowd, but did not order them to disperse.

"Local PD came by and said everything is okay as long as long as you wear your face mask and no drinking in public and, you know, keep the peace," said Albert Vasquez.

As concerns mount about "super-spreader" events that have contributed to the current COVID-19 surge, law enforcement in Los Angeles is expected to be on party patrol New Year's Eve.

As concerns mount about "super-spreader" events that have contributed to the current COVID-19 surge, law enforcement in Los Angeles is expected to be on party patrol New Year's Eve.

Public officials are urging Angelenos not to gather in groups for the holiday. Such gatherings for Halloween and Thanksgiving were seen as major contributors to the current COVID-19 surge which has pushed the daily death toll to record levels in Los Angeles County.