KABC
LOS ANGELES (KABC) -- Hundreds of students and staffers at two Los Angeles universities were quarantined or ordered to stay home Friday, skyrocketing since officials announced two cases of students who may have exposed the campuses to the highly contagious illness.

Those under the orders have been told to stay home and avoid contact with others as much as possible.

A person with measles visited Cal State L.A.'s Library North on April 11 from 11 a.m. to 3 p.m. As a result, university officials said 127 staff employees and 71 student employees were sent home initially under quarantine orders and told to stay home.

"The Department of Public Health has determined that there is no known current risk related to measles at the library at this time," Cal State L.A. said in a statement.

More: Measles outbreak in Southern California: Everything you need to know

Los Angeles County health officials said 129 UCLA students were quarantined on campus or self-isolating off campus as of Friday. That number is slightly higher than the initial 117 held Thursday. The student with measles attended classes at Franz Hall and Boelter Hall on April 2, 4 and 9 while contagious, according to UCLA.

"We expect that those notified will be quarantined for approximately 24-48 hours until their proof of immunity is established. A few may need to remain in quarantine for up to seven days. We have arranged for those who live on campus to be cared for at UCLA while they are quarantined," UCLA said in a statement.

Several other cases have been reported across the L.A. area.

County health officials warned of three possible measles exposures in the past two months. A passenger with the illness passed through Terminal 7 on April 3. That person arrived in the late morning and left that night through Terminal 8. Another traveler with the viral infection passed through the airport in Terminal 7 on March 5. Another person with measles arrived at the airport on Feb. 21, traveling from Terminal B to Delta Terminal 3.
Health officials do not believe LAX is under threat of a measles outbreak.

Long Beach officials said a person infected with measles went through the Long Beach Airport the morning of March 30 and April 7. Health officials said anyone in the airport at the time could have been exposed, but there was no continuing risk of exposure.

A person with measles visited El Pollo Loco Restaurant on Verdugo Boulevard in La Cañada Flintridge on April 11, while another individual went to El Sauz Tacos on San Fernando Road in Glendale on April 13.

The Centers for Disease Control and Prevention says the United States now has the highest number of measles cases in a year since measles were eliminated in 2000, with nearly 700 measles cases reported in 22 states.

Measles is highly contagious and can stay in the air for up to two hours after an ill person coughs or sneezes, and can stay on surfaces for several hours, health officials say. About 90 percent of people who are exposed and not immune to the illness become sick 7 to 21 days after exposure.

Measles symptoms include fever, dry cough, runny nose, sore throat and red, watery eyes. Three to five days after symptoms begin, the CDC says a rash breaks out which appears as flat red spots on the face at the hairline and spread downward to the neck, trunk, arms, legs and feet. Small raised bumps may also appear on top of the flat red spots.

For more information on measles, go to publichealth.lacounty.gov. 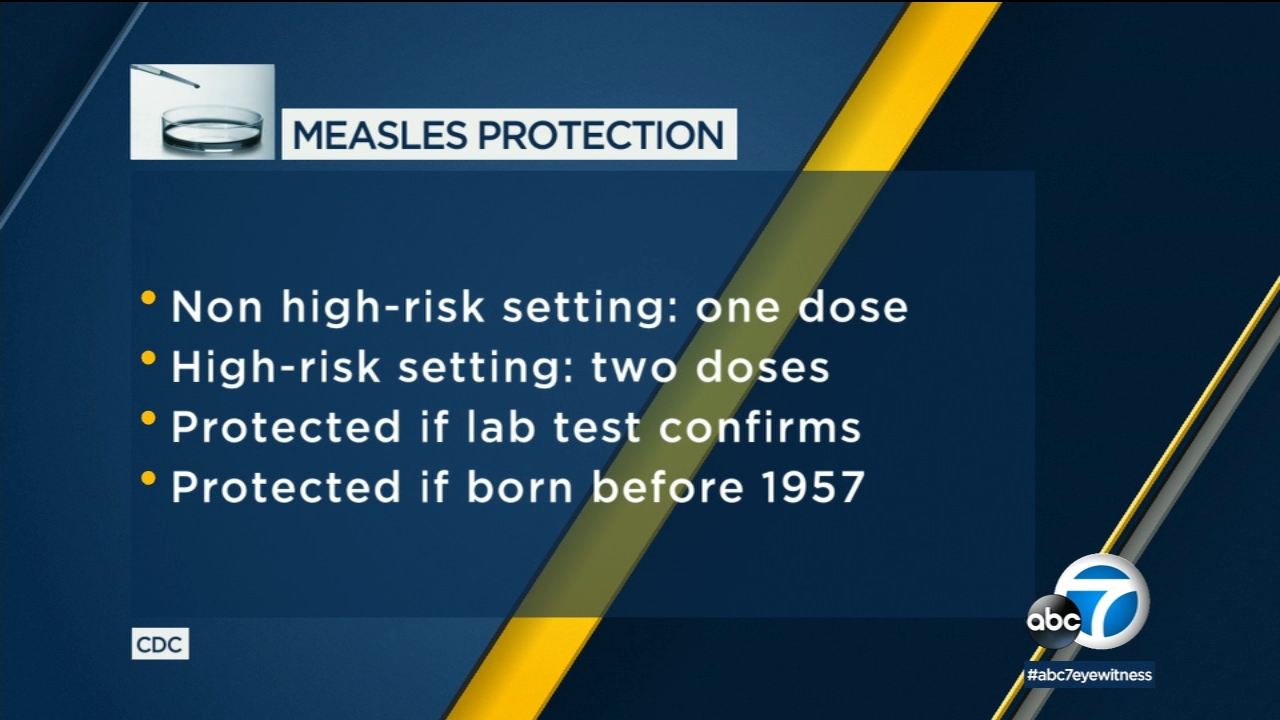 This image explains information on measles.