KABC
By David Ono
IRVINE, Calif. (KABC) -- An Orange County woman who was on the brink of death and denied her sister's life-saving stem cells by the U.S. government will now be able to receive the treatment.

Two weeks ago, Helen Huynh was in a hospital bed surrounded by her family as they fought to keep her alive. She has leukemia and needed a stem cell transplant. Her sister, Thuy, was a perfect match.

But Thuy lives in Vietnam and after several requests to allow her into the U.S., the U.S. government denied her entry, stating there was not enough reason for her to leave the country at the end of her temporary stay.

But after Helen's story was shared by viewers and thanks to the efforts of representatives Alan Lowenthal and Lou Correa, as well as Sen. Kamala Harris, the government granted a temporary stay for Thuy.

She will be boarding a plane in a matter of hours and coming to the states in an effort to save her sister's life.

Lowenthal released a statement after the stay was granted.


"I want to thank U.S. Ambassador to Vietnam Ted Osius and the State Department for their efforts to respond to our concerns and to the urgency of this humanitarian crisis."
Harris' office also released the following statement:

"Senator Harris is pleased with the outcome of this case and grateful that the family can now be reunited."
Helen will be transferred from UCI Medical Center to the City of Hope Hospital in Duarte. She will still have a tough road to recovery after the transplant.
Report a correction or typo
Related topics:
health & fitnessgarden groveorange countyorgan donationstransplanttravelvisagovernmentleukemiafamilypoliticscancer
Copyright © 2020 KABC-TV. All Rights Reserved.
RELATED 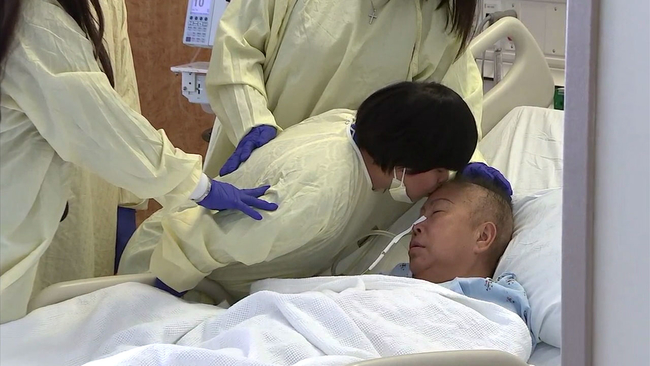