Anaheim officials are expecting guidelines from the state soon that will provide a path for reopening theme parks like Disneyland and Knott's Berry Farm.
KABC
By Jessica De Nova 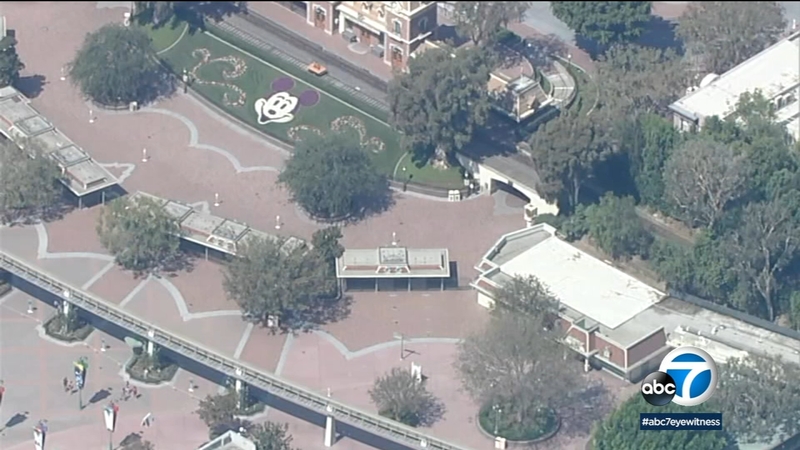 Home to both Disneyland and Knott's Berry Farm, Orange County's economy has been hit particularly hard by the continued closure of theme parks in California since March. Disney recently announced 28,000 layoffs in its Parks, Experiences and Products division, which includes Disneyland.

County leaders remain disappointed that the state has not issued any guidelines yet.

The trade association representing theme parks says it saw a draft of the state's new guidelines on Thursday, but the group is urging Gov. Gavin Newsom to make some changes before issuing them.

"We ask the Governor not to finalize guidance for amusement parks before engaging the industry in a more earnest manner, listening to park operators' expertise, and collaborating with the industry on a plan that will allow for amusement parks to reopen responsibly while still keeping the health and safety of park employees and guests a top priority," said Erin Guerrero, executive director of the California Attractions and Parks Association.

Gov. Gavin Newsom said he will not give in to pressure from business executives and local political leaders, but that the state will reopen theme parks when appropriate.

Newsom said the state's latest guidelines prove "my assertion that we are not putting the health and safety of people visiting this state or recreating in this state at theme parks at risk."

Orange County had already been on a path to move to a less-restrictive state tier that would have allowed more businesses to reopen but a spike in coronavirus cases has dashed those hopes for now.

The county is now on the state's red tier, but was hoping to move to orange, which would allow more businesses to reopen and activities resume. But a spike in the case rate this week is keeping Orange County in the red.

RELATED: Here's how the state's color-coded tier system works and where your county stands now

Large counties like Orange and Los Angeles are also now contending with a new state measurement, health equity rate, that looks to evaluate and help lower-income communities that are being hit even harder by the virus.

Orange County has about a 3% positivity rate countywide, but individual communities are much higher than that, one as high as 12%.

(Positivity rate measures how many of the tests that are conducted are positive for COVID-19. The case rate is a measurement of total cases per 100,000 people in an area's overall population.)

County CEO Frank Kim remains confident the county will meet the new requirements because of efforts in place such as the Latino Health Equity initiative.

Under the state guidelines for disadvantaged communities, Kim said, "We've got to achieve a health equity rate and testing positivity rate that is 5.2% - and we're very close to that."