3 killed as helicopter crashes into house in Newport Beach 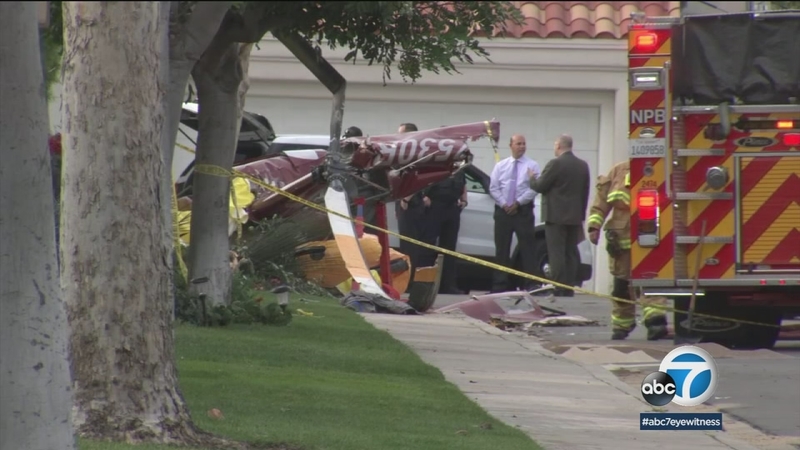 3 killed as helicopter crashes into house in Newport Beach

The crash was reported around 1:45 p.m. at Egret Court and Shearwater Place in the Bay View Terrace community.

The aircraft struck the yard and wall of the home. A piece of the tail rotor was seen lodged in the tiled roof of a home across the street.

The Robinson R44 light helicopter normally seats four people. Newport Beach police said there were four people on the aircraft and one on the ground who was also apparently struck by some debris from the crash.


The helicopter is based out of John Wayne Airport in Santa Ana, which is only about a mile from the crash site. The helicopter's manufacturer, Robinson Helicopter Co. is based in Torrance. The operator is Santa Ana-based Revolution Aviation.

Revolution Aviation is known for providing scenic tours and it teamed up with Canyon High School to teach students about aviation and possible careers.

The company CEO, Mark Robinson, said the thoughts and prayers of the company were with the victims and families involved in the crash.

Witness accounts and skid marks and debris indicate the aircraft's rotor may have first struck the roof of the other house as it was coming down, then hit the ground and skidded into the front wall of the home.

A woman who lives in the neighborhood heard the crash and ran outside to witness the immediate aftermath.

"I thought it was falling on my home," she told Eyewitness News. "It was just this intense loud noise. It sounded like a train coming through."

At least three people were killed and multiple others injured when a helicopter crashed into a house in Newport Beach Tuesday afternoon, officials said.

She ran outside and saw a chaotic and gruesome sight.

"I put my hand on the back of the helicopter and started praying over them. Because I knew at that point there weren't any survivors."

She said she knows the people who live in the home where the helicopter crashed. A woman was home at the time, but was in the kitchen and did not suffer any injuries.

The coroner identified some of the victims, but did not release the information to the public Tuesday.