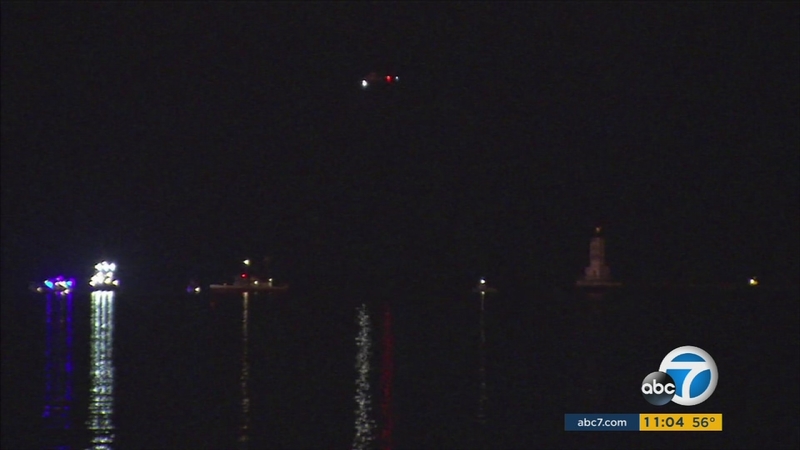 SAN PEDRO, LOS ANGELES (KABC) -- Authorities responded to reports of a helicopter down in the ocean off San Pedro.

So far no wreckage or victims have been spotted. But Eyewitness News has learned that an R-22 Beta helicopter left the Torrance Airport around 4:30 p.m. The helicopter belongs to JJ Helicopters, a Torrance-based company, and the aircraft is missing.

The Port Police said a pilot and one passenger were on board the missing helicopter.

Officials say passengers on a cruise ship reported seeing a helicopter go down in the port area.

The U.S. Coast Guard, who came to assist in the search, closed the Los Angeles Harbor entrance as efforts to find something continued.

Search crews have night-vision goggles and infrared sensors to aid them as they look for wreckage, floating personal belongings or oil on the surface, he said.

Officials will continue to search at least as long as their models say there is a chance of survival of anyone who may be in the water. Based on current water conditions, that would mean about 19-20 hours after the crash, Matthews said.
Related topics:
san pedrolos angeleshelicopterhelicopter crashaviation
Copyright © 2022 KABC Television, LLC. All rights reserved.
TOP STORIES
LA County could hit 'high' COVID level in July, prompt return of masks
Here's what to know about the end of CA's eviction moratorium
California late start law aims to make school less of a yawn
Woman searching for brother reported missing in Redondo Beach
Lawyer: Nipsey Hussle lifted up neighborhood he was gunned down in
Apple's newest CarPlay feature will make buying gas easier
How to save money when buying a new car in an inflated market
Show More
Orange County confirms 1st presumptive case of monkeypox
OC woman attacked and sexually battered inside Irvine storage facility
Silver Lake restaurant offers free food in exchange for Sriracha
USC, UCLA moving from Pac-12 to Big Ten in 2024
Slain El Monte officers: Honoring 2 loving fathers and valiant heroes
More TOP STORIES News