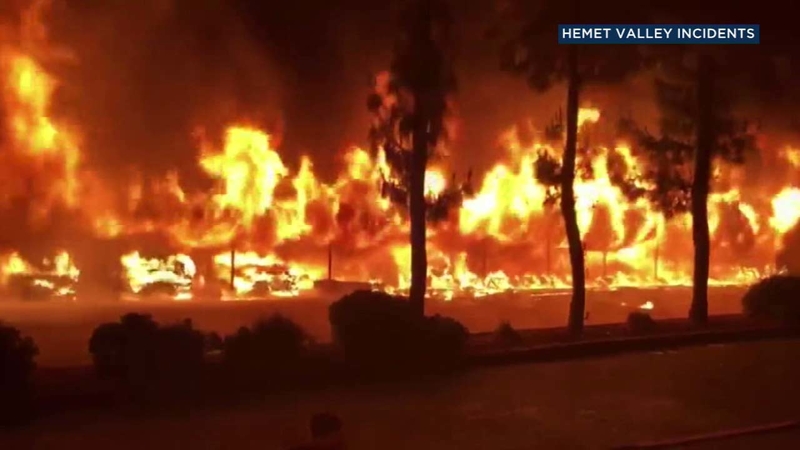 The fire was reported near an apartment complex shortly after 1 a.m. in the 600 block of Carson Street. Hemet firefighters were initially dispatched for a report of multiple explosions and people being trapped.

When fire units arrived, they discovered several cars fully engulfed in flames in a carport with exposure to the adjacent apartment building, fire officials said.

Quick-thinking firefighters, with the help of Riverside County Cal Fire crews, kept the vicious wall of flames from spreading to the apartment building and declared the blaze a knockdown.

Residents were evacuated, and the fire displaced about 20 people, officials said.

Almost immediately after the fire ignited, residents who live in the adjacent apartment building realized the main entrance was blocked. Fearing the flames would consume their apartments, they said climbing an iron fence in the back was the only way out.

Savanna Samperio was among three people injured trying to escape.

"So scary only having that back exit to leave out of, and I never jumped a gate that high before and I was barefoot with two kids," Samperio described.

Samperio's new car was destroyed in the blaze, along with six other vehicles. Samperio said she's just grateful to be alive.

"Seeing it, hearing it, going through it, feeling it, material stuff doesn't even matter," she said.

According to preliminary information, it is believed the cause of the fire may have stemmed from a laundry room in the carport. Fire officials also said a man may have been injured near the dryer during an explosion.