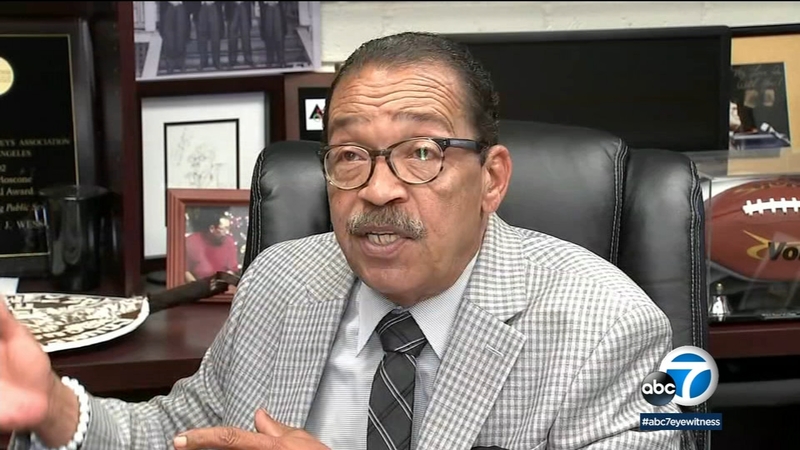 LOS ANGELES (CNS) -- The Los Angeles City Council voted unanimously Tuesday to appoint former Councilman Herb Wesson to represent the city's 10th District as a replacement for Councilman Mark Ridley-Thomas, who was suspended after being indicted in a federal corruption case.

Wesson will hold the position through Dec. 31 unless Ridley-Thomas is acquitted or the charges against him are dropped.

"With over 30 years in public service representing the residents of Council District 10, there is no better choice at this time than former council member Herb Wesson," Council President Nury Martinez said after announcing her motion to appoint Wesson last week.

"Mr. Wesson cares deeply about the communities he represents and knows the district better than anyone. The constituents of Council District 10 need a voting member who understands their community to represent them within Council Chambers."

Wesson is termed out of seeking election to the City Council because he represented the 10th District from 2005 to December 2020. He also served as the president of the council before Martinez, from 2012 to 2020.

Councilman Mike Bonin sought to delay Tuesday's vote until after the council receives a detailed report on the full range of available scenarios, including a public report from the city attorney on eligibility requirements for potential appointments and a report from the city attorney, city clerk and chief legislative analyst on steps, costs and legality of holding a special election for district residents to pick their own temporary replacement.

Bonin's amendment to receive the reports was adopted by the council Tuesday -- however, an amendment to delay the vote by one week until after the reports are received fell one vote short and was not adopted.

"I support Mr. Wesson and I was glad to vote for him, but the City Council should not have been forced to consider a single option, for an up or down vote," Bonin said in a statement after the vote. "The City Charter does not clearly anticipate a temporary vacancy, and the questions of how to handle it are murky and complex. The council should have discussed all options -- appointment, special election, reinstatement. And it should have discussed all of them out in the open."

On Tuesday, several people called into the City Council meeting pushing for Wesson to be appointed to represent the district, noting that residents have not had a voting representative since Ridley-Thomas' suspension on Oct. 20.

A woman who identified herself as Lillian Wilson, "a stakeholder in the district for 45-plus years," urged the council to vote immediately to appoint Wesson, saying "we've been without representation for four months and we don't want this to go on another six to 12 months, we need representation, we need a vote at the table."

Damien Goodmon, a board member for the Downtown Crenshaw Rising project -- a movement to buy the Crenshaw Mall and redevelop it for the community -- also called in to urge Wesson's appointment, saying the district's lack of representation has impacted progress on major issues. He added that

Wesson's appointment would "remain consistent with the precedent set by this council when Mitch Englander stepped down and the previous council member was put in Englander's seat."

Former Councilman Greig Smith, who represented Council District 12 from 2003 to 2011, represented the district again from January to August 2019 after Englander vacated the seat in December 2018 to take a job with the Oak View Group, a global sports and entertainment advisory, development and investment company. Smith at the time was eligible for another term on the City Council after opting to not run for a third term.

While some in the community have pushed for Wesson to be appointed to the seat, others have expressed the view that suspending Ridley-Thomas before a trial goes against the presumption of innocence until proven guilty.

On Friday, the Southern Christian Leadership Conference of Southern California filed a lawsuit aimed at getting Ridley-Thomas reinstated to the City Council, alleging that "the decision to suspend (Ridley-Thomas) contravenes the bedrock presumption of innocence guaranteed under California law."

Ridley-Thomas was executive director of the organization's Greater Los Angeles chapter from 1981-91.

Following the council's appointment Tuesday, SCLC of Southern California's attorney in the lawsuit, John Sweeney, said the vote was "a slap in the face to the African American community and our collective right to choose our elected representatives for ourselves.

"At some point this week, the Los Angeles Superior Court will hear the lawsuit that was filed last Friday on behalf of the community, the Council's action to ram through a decision to unlawfully appoint a retired councilman to 'temporarily' replace our duly elected representative is all the more galling," Sweeney said.

"Mark Ridley-Thomas's chief concern is for the voters of District 10. They are asking for an elected and accountable representative, not someone hand-selected by Nury Martinez. Instead of allowing the voice of these voters to be heard, it is disappointing that the Council rushed today's action through to try (to) avoid a court ruling on their constitutional rights," Proctor said.

The 10th District has been overseen by caretaker Karly Katona, who does not have voting authority. The City Council's vote to suspend Ridley-Thomas passed with three council members in opposition: Councilmen Marqueece Harris-Dawson, Bonin and Curren Price. Price said before the vote that his office had been inundated with calls of support for Ridley-Thomas from South L.A. residents.

The trial for Ridley-Thomas and former dean of the USC School of Social Work Marilyn Flynn is tentatively set to begin Aug. 9. The defendants are charged in a 20-count indictment alleging a secret deal whereby Ridley-Thomas -- when he was a member of the county Board of Supervisors -- agreed to steer county money to the university in return for admitting his son Sebastian Ridley-Thomas into graduate school with a full-tuition scholarship and a paid professorship.

Flynn allegedly arranged to funnel a $100,000 donation from Ridley-Thomas' campaign funds through the university to a nonprofit to be operated by his son, a former member of the state Assembly. The donation prompted an investigation by the U.S. Attorney's Office in Los Angeles that remains open, prosecutors said.

In exchange, the indictment contends, Ridley-Thomas supported county contracts involving the School of Social Work, including lucrative deals to provide services to the county Department of Children and Family Services and Probation Department, as well as an amendment to a contract with the Department of Mental Health that would bring the school millions of dollars in new revenue.

Both defendants have strongly denied any wrongdoing and promised that evidence will clear their names.