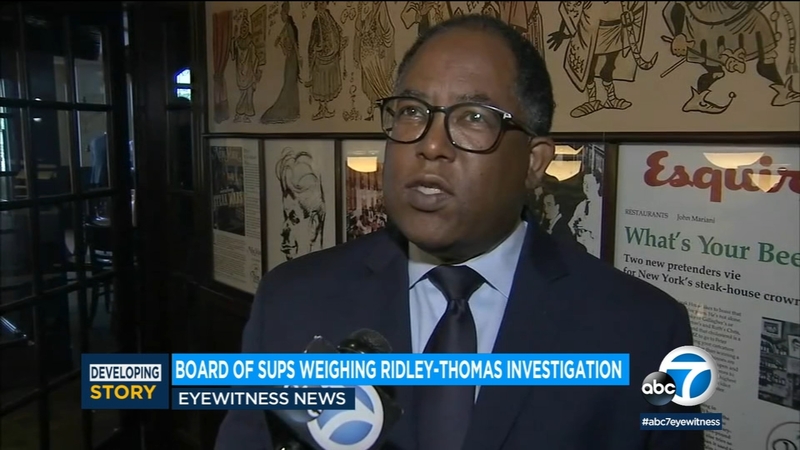 Ridley-Thomas, who served as a county supervisor from 2008 to 2020, is accused of promising to steer millions of dollars in contracts to the University of Southern California if his son got a scholarship and teaching job there.

The county board will vote Tuesday on whether to authorize the motion, calling for the hiring of an outside law firm and a forensic auditor to investigate the allegations and provide recommendations for any policy changes.

The motion also calls on all county departments to cooperate with the federal investigation, including preserving records and other materials, and to make it clear to federal prosecutors that the county review is not intended to interfere with the federal case.

Los Angeles civil rights leaders say no one has seen any evidence in the case against Mark Ridley-Thomas. They feel any calls that he resign or be removed from the Los Angeles City Council are premature.

The motion was introduced by supervisors Hilda Solis and Kathryn Barger. Both Solis, who was elected in 2014, and Barger, elected in 2016, served on the board at the same time as Ridley-Thomas.

Ridley-Thomas said last week he has no intention of resigning his council seat and is focused on fighting the allegations.

"When I ran for City Council, I made it clear that my highest priority would be addressing the city's homeless and housing crises, and that remains the case. There is no issue that matters more to Angelenos and to me," Ridley-Thomas said in a prepared statement.

"Going forward, I intend to do two things: disprove the allegations leveled at me and continue the work I was elected to do -- most importantly, addressing the homeless and housing crisis.''