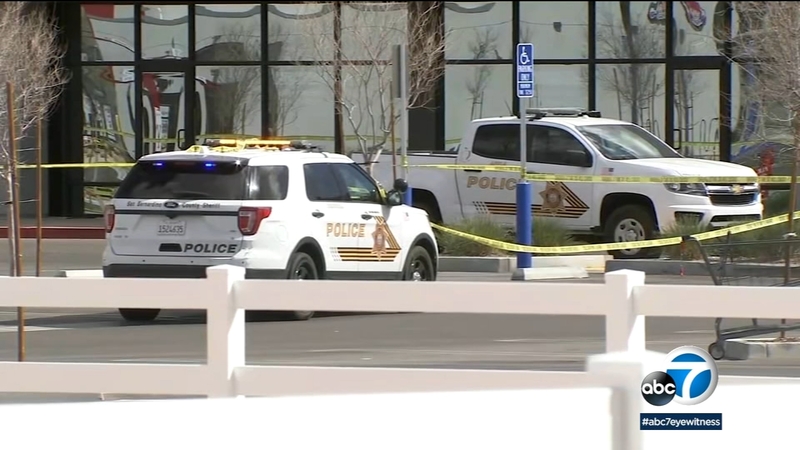 SAN BERNARDINO, Calif. (KABC) -- A San Bernardino County sheriff's deputy remained hospitalized on Thursday, days after being shot in a confrontation with a suspect in Hesperia.

"Deputy Dustin Whitson remains in critical condition in ICU at an area hospital. He is surrounded by his family and friends and is receiving excellent medical care," said Sheriff John McMahon during a press conference.

The incident happened Tuesday afternoon in the parking lot of a shopping center near Bear Valley Road and Jacaranda Avenue. Whitson was responding to a call from a nearby storage facility after the suspect, later identified as 40-year-old Robert Sparks, has been asked to leave.

"He was asked to leave previously because he had been found living in one of the storage units," said McMahon.

Investigators say when the deputy approached Sparks sitting in his vehicle, a short discussion took place but for some unknown reason Sparks opened fire, striking Whitson in the arm.

"Deputy Whiston was shot in the left arm and the bullet transitioned into his chest area causing damage. It was behind the vest," said McMahon.
EMBED More News Videos

A sheriff's deputy was shot and wounded Tuesday in a confrontation with a suspect in Hesperia, officials said.

A good Samaritan who witnessed the shooting rushed to help Whitson and called for help on the deputy's radio.

"After Deputy Whitson was shot and fell to the ground, Sparks took his gun from his holster and left with it," said McMahon.

The suspect fled but was spotted a few minutes later on Apple Valley Road by an off-duty deputy. A pursuit ensued after deputies tried to pull Sparks over followed, by a gun battle.

McMahon said Sparks drove through a field until the SUV got stuck in soft sand that when he took off on foot towards a home.

"And as he entered the fenced area of this inhabited residence and headed towards the front door, he fired again at the helicopter. Deputies on the ground as well as the deputy in the helicopter returned fire."

Sparks was struck 30-feet from the front door of home that was occupied at the time. Deputies also recovered two guns from Sparks including Deputy Whitson's service revolver. Sparks was taken to the hospital and remains in critical condition.

"He's got an extensive criminal history most recently being committed to Patton State Hospital in 2016. He was released towards the end of 2020 and transitioned to a board and care facility."