Half of US adults have high blood pressure, according to new health guidelines 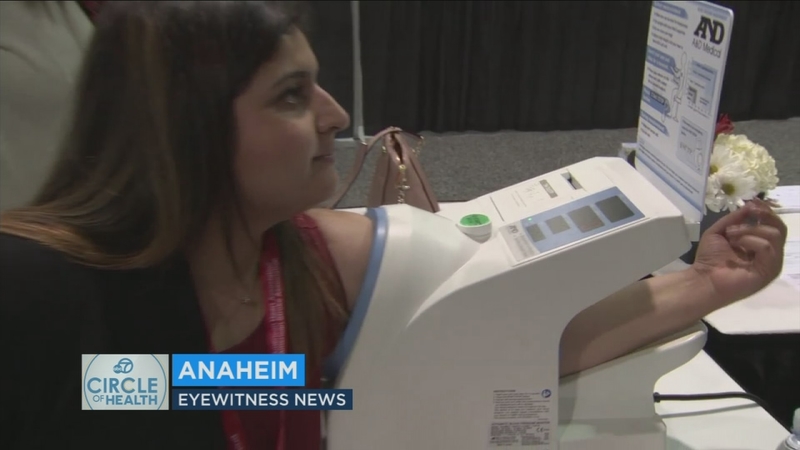 ANAHEIM, Calif. (KABC) -- New guidelines lower the threshold for high blood pressure, adding 30 million Americans to those who have the condition, which now plagues nearly half of U.S. adults.

High pressure, which for decades has been a top reading of at least 140 or a bottom one of 90, drops to 130 over 80 in advice announced Monday by the American Heart Association.

The change means an additional 14 percent of U.S. adults have the problem, but only an additional 2 percent will need medication right away; the rest should try healthier lifestyles, which get much stronger emphasis in the new advice. Poor diets, lack of exercise and other bad habits cause 90 percent of high blood pressure.

"I have no doubt there will be controversy. I'm sure there will be people saying 'We have a hard enough time getting to 140,'" said Dr. Paul Whelton, a Tulane University physician who led the guidelines panel.

But the risk for heart disease, stroke and other problems drops as blood pressure improves, and the new advice "is more honest" about how many people have a problem, he said.

Dr. Willie Lawrence, who is with the American Heart Association said, now millions of Americans are affected by the change.

But cardiologists say there are steps people can take to lower their numbers.

"The goal is not to get more people on drugs. The goal is to get blood pressure down," Lawrence said.

Of the 75 percent of people who take medications for hypertension, only half have managed to get their blood pressure under control.

Lawrence said it has start with your lifestyle.

That means eating less salt, reading labels on processed foods, and eating more fruit and fiber. You may not realize just how high sodium levels are until you look closely at nutrition labels.

It also means opting for healthy lean sources of protein, and exercising for at least 30 minutes, three times a week.

Cardiologists said walking can be a great form of exercise, which research backs showing it can also help lower cholesterol.

Reducing alcohol intake may be helpful in lowering blood pressure, too.

You can monitor your blood pressure at home or use a machine at a drug store or pharmacy. Keep a good record of it and share with your healthcare provider. It's a great way for them to see trends, and get a big picture of your heart health.

And more advice: be consistent and take your blood pressure at the same time every day, and don't take it for at least a half hour after you've exercised.

The upper threshold for high blood pressure has been 140 since 1993, but a major study two years ago found heart risks were much lower in people who aimed for 120. Canada and Australia lowered their cutoff to that; Europe is still at 140 but is due to revise its guidance next year.

The guidelines were announced Monday at an American Heart Association conference in Anaheim.

WHAT THE CHANGES MEAN

The guidelines set new categories and get rid of "prehypertension":

That means 46 percent of U.S. adults have high pressure (stages 1 or 2) versus 32 percent under the old levels.

How common it is will roughly triple in men under 45, to 30 percent, and double in women of that age, to 19 percent.

For people over 65, the guidelines undo a controversial tweak made three years ago to relax standards and not start medicines unless the top number was over 150. Now, everyone that old should be treated if the top number is over 130 unless they're too frail or have conditions that make it unwise.

"The evidence with this is so solid, so convincing, that it's hard to argue with the targets," said Dr. Jackson Wright, a guidelines panel member from University Hospitals Cleveland Medical Center. Older people "have a 35-to-50-fold higher risk of dying of a heart attack or stroke compared to younger people."

"Some more vulnerable patients who get treated very aggressively may have trouble with falls" because too-low pressure can make them faint, he said.

Certain groups, such as those with diabetes, should be treated if their top number is over 130, the guidelines say. For the rest, whether to start medication will no longer be based just on the blood pressure numbers. The decision also should consider the overall risk of having a heart problem or stroke in the next 10 years, including factors such as age, gender and cholesterol, using a simple formula to estimate those odds.

Those without a high risk will be advised to improve their lifestyles - lose weight, eat healthy, exercise more, limit alcohol, avoid smoking.

"It's not just throwing meds at something," said one primary care doctor who praised the new approach, the Mayo Clinic's Dr. Robert Stroebel. If people continue bad habits, "They can kind of eat and blow through the medicines," he said.

The guidelines warn about some popular approaches, though. There's not enough proof that consuming garlic, dark chocolate, tea or coffee helps, or that yoga, meditation or other behavior therapies lower blood pressure long-term, they say.

The government no longer writes heart guidelines, leaving it to medical groups. Unlike previous guideline panels, none on this one have recent financial ties to industry, although some on a panel that reviewed and commented on them do.

The guidelines were published in two journals - Hypertension and the Journal of the American College of Cardiology.

HOW AND WHEN TO CHECK IT

Blood pressure should be checked at least once a year by a health professional, and diagnosing high pressure requires 2 or 3 readings on at least two occasions.

The common way uses a cuff on the upper arm to temporarily block the flow of blood in an artery in the arm and gradually release it while listening with a stethoscope and counting sounds the blood makes as it flows through the artery. But that is prone to error, and many places now use automated devices.

The guidelines don't pick a method, but recommend measuring pressure in the upper arm; devices that work on fingers or are worn on wrists "aren't ready for prime time," Whelton said.

Home monitoring also is recommended; devices cost as little as $40 to $60.

Unlike adults, numbers for normal pressure in children vary with age, height and gender. Kids should be checked at least once a year for high pressure, say guidelines announced in August by the American Academy of Pediatrics.

After age 13, the levels defining high pressure are the same as for adults, said a member of the pediatrics panel, Dr. Elaine Urbina of Cincinnati Children's Hospital Medical Center.

"When you turn 18 years and one minute, you shouldn't suddenly have a new definition," she said.