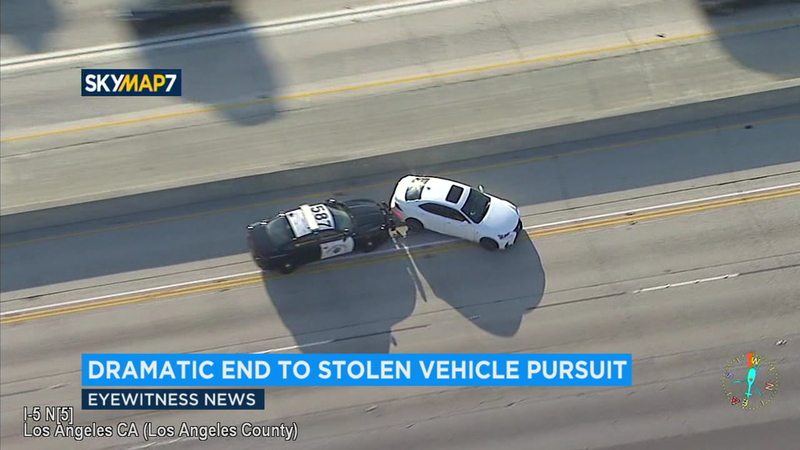 LOS ANGELES (KABC) -- A suspect in a police officer's stolen Lexus flew at high speeds over Los Angeles County freeways in a chase that ended in a PIT maneuver and spinout on the northbound 5 Freeway.

The car, which had paper plates, was believed to be the personal vehicle of an off-duty Los Angeles Port police officer. It was stolen from the Temple City area Thursday night.

Officials believe the deputy's service weapon was in the vehicle.

The chase moved from the El Monte area through to Monrovia and headed westbound on the 210 Freeway and then to the 134 westbound toward the Glendale and Burbank area in light traffic at speeds reaching well over 100 mph at times.

By 3:18 p.m. the car appeared to be slowing down as a patrol vehicle pulled up alongside and performed a PIT maneuver on the northbound 5 Freeway in the San Fernando area.

The move sent the Lexus spinning out across the freeway, coming to rest on the right shoulder.

Officers approached the vehicle with guns drawn and a K-9 unit ready. The suspect placed his hands out the window and emerged, following officers' instructions and surrendering peacefully.

Police conduct a successful PIT maneuver after a suspect stole an officer's vehicle on Friday, Nov. 16, 2018.