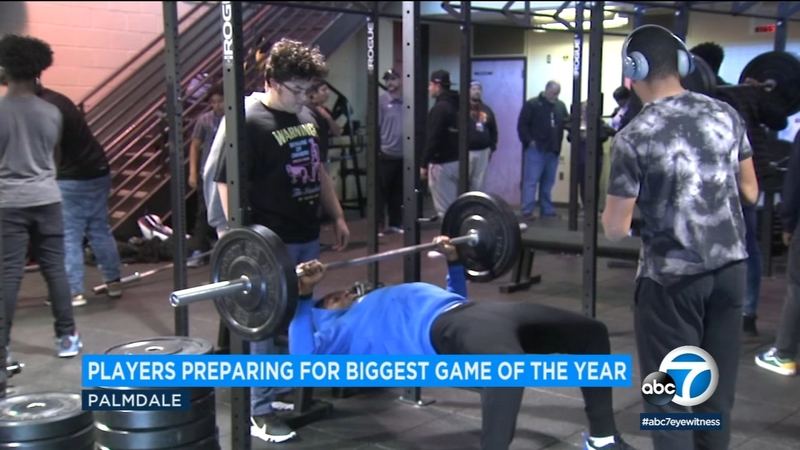 PALMDALE, Calif. (KABC) -- Members of the Highland High School football team have been putting in work in the weight room, getting ready for their biggest game of the year.

The Bulldogs celebrated last week after winning the regional championship. On Saturday, in a game against Ripon High School, the team will compete for its first state crown.

"It feels so amazing, especially losing it last year, coming to this game, will we win," said running back Isaiah Creech. "It's just amazing, no feeling like it."

Coach Richard Lear said it was the "first time any public school out here in the Antelope Valley, and especially Palmdale, has made it to the regionals. It was exciting just being in the game."

"I know one thing that's special about this group, that I can tell you from past teams I've played on," said quarterback Damien Pecoraro, "it's a family, it's a brotherhood. We're all best friends outside football."

The Bulldogs will travel to Northern California for the championship game. It's an expensive trip for the public school.

"It costs a lot to stay, it costs a lot to drive," said parent Alysen Spiteri. "It would just be amazing if we could get people out there and involved be there to support them."

Community members are supporting Highland, trying to raise around $10,000 to charter buses so the cheer team and parents can attend the game.

"To have them just get off the field and be able to give their parent a hug after that and say, 'I did my best and I won' -- it's just a miracle and it's just a blessing," community supporter Amy Crumb said.