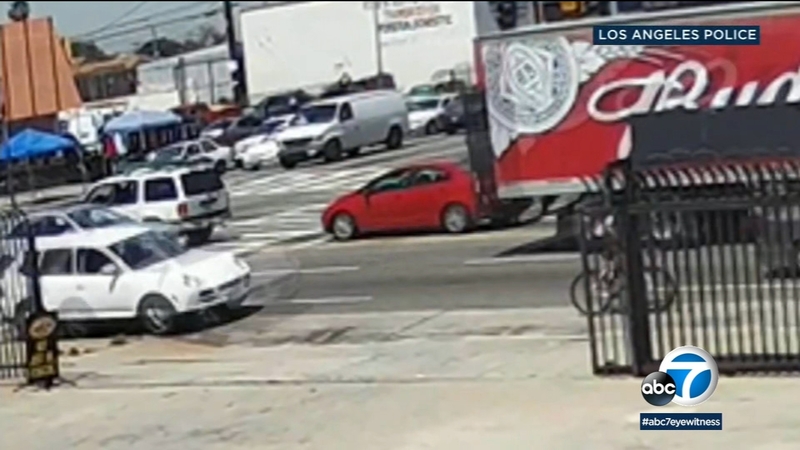 DOWNTOWN LOS ANGELES (KABC) -- Rampant hit-and-runs across Southern California are causing new concerns as many of the crashes are deadly and those responsible are still on the loose.

Beverly Owens was comforted Wednesday night as friends lit candles at a memorial to her son Frederick Frazier, the 22-year-old hit and killed on his bicycle one year ago to the day in South Los Angeles.

Surveillance video shows the driver of a white Porsche Cayenne take off, leaving him in the street.

"I'm sick. I've cried every day, 365 days. Every day," Owens said. "He's worthy of every tear but it's not fair, someone needs to be held accountable."

Police arrested Mariah Banks last year, more than a month after the crash. Police allege she had re-painted the vehicle black. Court records show she was just charged last week with vehicular manslaughter and felony hit-and-run.

In an unrelated case on March 22, the LAPD is asking for help to find a driver in a red shirt.

Police identify him as 30-year-old Paulino Diego Pedro. Video shows him taking off after he allegedly hit a 20-year-old woman, leaving her with broken bones. Her injuries were so severe, her foot had to be amputated. It happened on Jefferson Boulevard, east of San Pedro Street in Los Angeles.

In another case on March 11, a man was seen walking away from a black 2019 Rolls-Royce after hitting another vehicle near Georgia Street and Olympic Boulevard. The victim complained of pain.