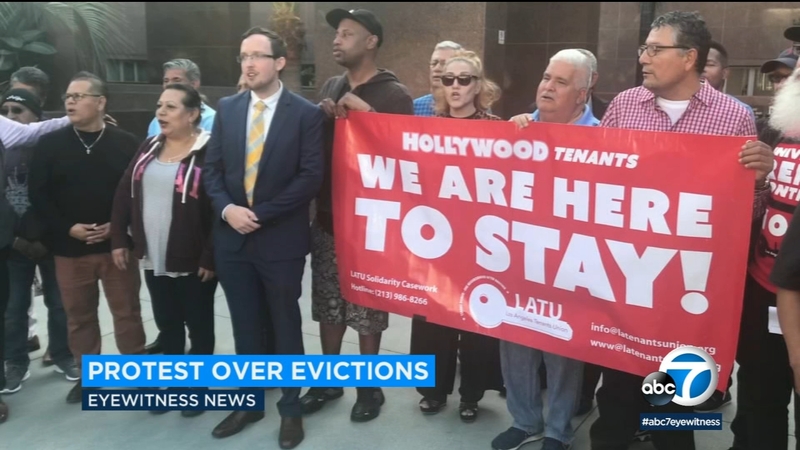 HOLLYWOOD, LOS ANGELES (KABC) -- Renters at an apartment complex in Hollywood say they're being forced to leave by developers who want to put up a multi-million dollar project that includes new apartments and a hotel.

The Los Angeles Tenants Union took their protest to court and announced they were filing a lawsuit.

"It is obvious they don't want these people to be able to return to their community," said Susan Hunter from the Los Angeles Tenants Union.

"I have nowhere to go as of yet," said tenant Danny Hernandez, who has been in his apartment for 11 years. He says he's lived his entire life in Hollywood and can't afford to move.

"It's always been home. It's where I live, where I grew up. It's my neighborhood. I work not too far from there, it's home. It's what I know," said Hernandez.

The planned multi-million dollar development is known as Crossroads Hollywood. According to its own website, there will be nine buildings, including a hotel, 950 new apartments, including low-income apartments, and 190,000 square-feet of commercial space. The tenants union says the city requires the developer to come up with a plan on what to do with displaced tenants. They say they would have a right to return.

"A plan would specify where the tenant will go between the moment they vacate the unit for demolition and when they return," said Don Wright from from Los Angeles Tenants Union.

"That's all they were asked to do: come up with a plan to make sure that these tenants come back to the newly constructed units and Herridge and their lawyer have fought that every step of the way," Hunter added.