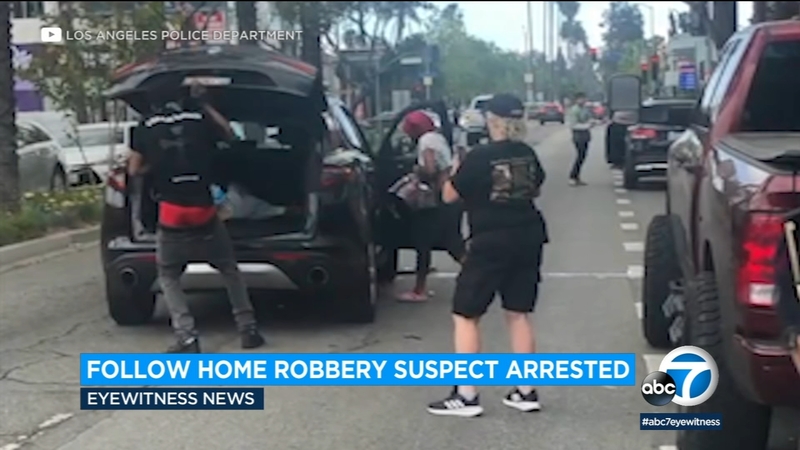 HOLLYWOOD, LOS ANGELES (KABC) -- Los Angeles police on Monday announced the arrest of a suspect accused of trying to rob shoppers at gunpoint in the heart of Hollywood.

Police say Cyree Jamal Carter, 23, and another suspect were caught on camera moments after they pulled a gun on people inside a white Audi near the intersection of Highland and Melrose avenues April 16.

The suspects were in a black 2020 Alfa Romeo SUV when they allegedly pulled alongside the Audi, pointed a gun at the victims and demanded they pull over so they could rob them.

The victim attempted to flee and drove off into traffic as Carter followed and later crashed into the rear of the victim's vehicle, causing a four-car collision, according to police.

LAPD said the suspects gathered their belongings, abandoned their vehicle and fled the scene.

Carter, an Inglewood resident, was taken into custody in Long Beach last Tuesday after leading officers on a short pursuit that morning, according to LAPD. Carter crashed the vehicle and dropped a gun when he fled on foot.

The suspect vehicle was left at the scene.

He was later arrested and booked for attempted robbery. His bail was reduced from $500,000 to $230,000 after the district attorney's office filed several charges against him, including attempted robbery and assault with a deadly weapon, LAPD said.

He was released from jail after he posted bond.

A second suspect in the case is still sought by police. The suspect is described as a Black woman in her early 20s, weighs about 130 pounds and is 5 feet 6 inches tall.